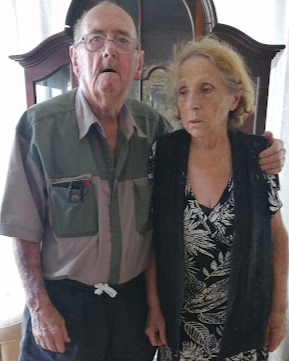 Robin and Lilian van Niekerk recently moved to Johannesburg, but have been victims of crime twice in the space of five days.
Image: Supplied

It was exactly three weeks ago when the  family moved into their new home in Georgina, Florida, west of Johannesburg, and they looked forward to creating new memories together, but all they've had so far is nightmares.

Just two weeks after moving into their new home, the family experienced a traumatic incident when they were victims of an armed robbery.

According to their granddaughter, Bronwyn Guerini, four armed men stormed into the house and tied up her elderly grandparents, Lilian (79) and Robin van Niekerk (83), as they ransacked the home.

Her mother, who was at the cottage on the property, was brought into the house, with a gun at her neck, and tied up along with the elderly couple. The robbers stole two vehicles which they had loaded with a firearm, televisions, a bank card belonging to Guerini’s mother and other personal valuables, including an undisclosed amount of cash.

Five days later, as the family was still trying to come to terms with their ordeal, there was more heartache as they woke up to find Robin's bakkie stolen.

Guerini, who also lives on the property with her grandparents, together with her mother and sister, told TimesLIVE her grandfather feels defeated. He’s a handyman and used the bakkie for his business.

“He feels helpless, traumatised, his body is tired. My grandmother is worried; she's fighting the fear and stress. My mom is on edge and holding on to her sanity. Everyone living in the house is near to breaking point from stress and worry,” she said.

Before the theft of the bakkie, Guerini said the family had been uneasy and feared they were being monitored. “On Saturday night, a white cable truck was driving in the street and passed our house about five times in less than 10 minutes,” she said.

Guerini says her grandparents had sold their house in Bela-Bela, Limpopo, so that they could all live together as a family, but were now regretting it.

“My family chose to move into the house so that we could all live together. My granny was telling me that she was trying to make up for lost time. My grandparents lived two hours away and we barely got to see them,” she said.

Though she says they have contemplated moving as a result of the crimes, she says this will not be easy to do.

“My grandparents are too fragile to move again. Moving in itself is a stressful experience. They shouldn't be packing and unpacking boxes,” she said.

A Johannesburg man was fatally shot several times in the chest as two men broke into his family's home in a gated community in Randpark Ridge on ...
News
2 weeks ago