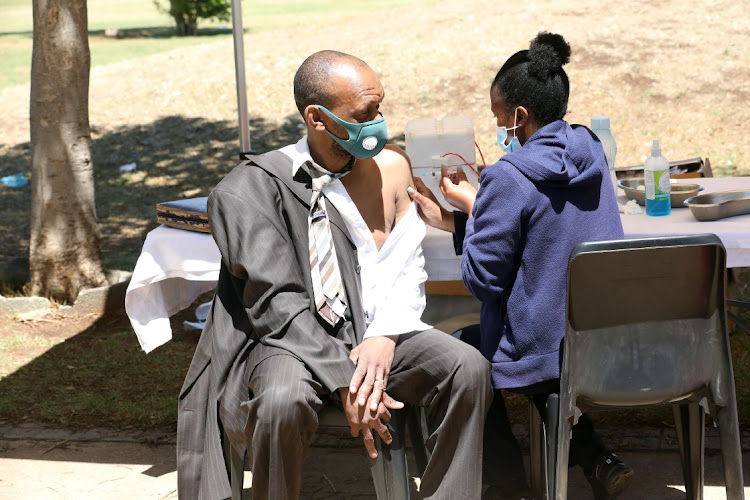 A man receives his Pfizer injection during the Vooma vaccination campaign in Soweto.
Image: Veli Nhlapo

South Africa has reached a milestone of 10-million fully vaccinated adults, according to figures released by the health department on Tuesday night.

The department administered 205,681 Pfizer and J&J vaccines in the last 24-hour cycle, with a total of more than 19-million vaccinations now having been administered.

Since the advent of Covid-19 in the country in March last year, SA has experienced three waves of the pandemic, affecting all nine provinces.

Sunday Times Daily reported on Monday that Dr Ridhwaan Suliman, a senior researcher at the Council for Scientific and Industrial Research , said all nine provinces were through the latest wave of infections.

“At this stage the indicators are encouraging. Hospital admissions are declining — but it is still difficult to predict how long this will last and what will transpire. What we are seeing, points to high levels of immunity in the community. It seems some amount of herd immunity has been developed,” he said.

So how long until we reach ‘herd immunity’?

During the launch of the vaccine rollout earlier this year, the government said it aimed to vaccinate 40-million of the adult population to achieve herd immunity.

The World Health Organisation defines herd immunity, or population immunity, as “the indirect protection from an infectious disease that happens when a population is immune either through vaccination or immunity developed through previous infection”.

A vaccine calculator developed by Media Hack allows users to see how long it would take to achieve herd immunity, depending on how many vaccines are administered daily.

Assuming the department will administer 200,000 vaccines daily, as seen in the last 24-hour cycle, SA could reach its 40-million target in May 2022. So not quite in time for Easter.

Deputy President David Mabuza said last month the vaccination drive was gathering speed and that SA would reach this target by December.

To  achieve this, the department would need to vaccinate more than 500,000 people daily.

Should we even be aiming for herd immunity?

Wits University professor of vaccinology Prof Shabir Madhi told Sowetan's sister publication TimesLIVE it is not possible to reach herd immunity with Covid-19, saying the reason for vaccination was to prevent deaths and severe illness.

“We need to stop talking about herd immunity because it’s not going to materialise with Covid-19. That is not the reason we are vaccinating. To achieve herd immunity, about 85% of the population would need to develop immunity against infection, not against severe disease, and that is extremely unlikely,” he said.

In the Johannesburg metro, 2.3-million vaccines have been administered to its population of 4.4-million.
News
9 months ago

As President Cyril Ramaphosa moved SA to lockdown level 1 from Friday, he announced that the health department was gearing up to issue mandatory ...
News
10 months ago

Prof Shabir Madhi says reaching herd immunity is not the reason for vaccinating people against Covid-19.
News
10 months ago

More than a million people have been fully vaccinated for Covid-19 in the Eastern Cape, the provincial health department said on Sunday.
News
10 months ago
Next Article