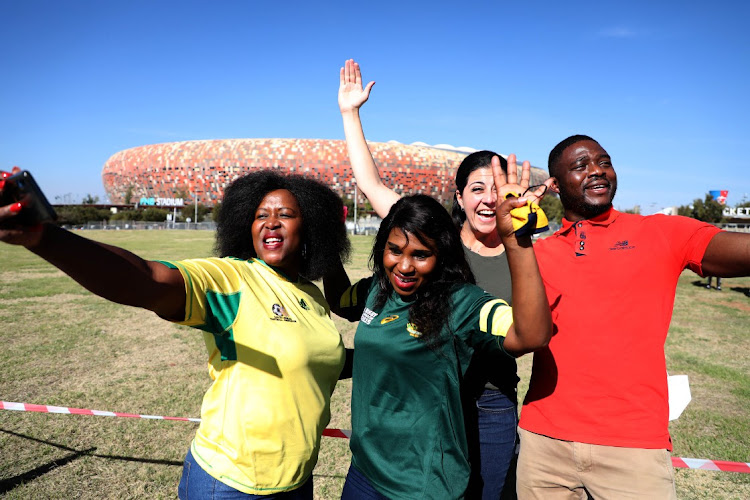 Soccer fans take selfies in a show of excitement after being allowed back to the stadium after 19 months supporters were not allowed into stadium for soccer games
Image: ANTONIO MUCHAVE

Football supporters who had to wait 19 months to attend soccer matches arrived at the FNB Stadium in high spirits on Tuesday afternoon ahead of Bafana Bafana game against Ethiopia.

At least 2,000 vaccinated fans were allowed into the venue to watch the 2022 Fifa World Cup qualifier Group G match.

Dressed in Bafana’s green and gold colours, waving their SA flags and clad in their iconic makarapa hats, the supporters were in a joyous mood, singing and dancing.

Jeanette Lesisa, 48, of Clayville, Midrand, said she was excited about being back at the stadium to watch Bafana play: “I am so excited. I am one of the vaccinated supporters. When I saw this [announcement of 2,000 fans being allowed at the stadium] on social media, I went boom, and said here is a chance to come back to the stadium. Coming back to the stadium is so enjoyable and wonderful.”

Thulani Ngcobo, 41, from Pretoria said it has been a very difficult journey to supporters not being able to go to the stadiums and watch soccer.

Joy Chauke, 47, Vooma vaccination drive ambassador, said: " I am fully vaccinated and I have got my ticket so that I can watch Bafana Bafana and Ethiopia. This is a big game for the team to qualify for the 2022 World Cup in Qatar. I am happy to be a 12th player. I can’t wait to see the mutual vibe we will have here at the stadium.”

Simphiwe Mpungose, 44, from Ennerdale, south of Johannesburg, said it was exciting to be part of the first game during the lockdown. "We were locked in our homes and were not able to go to the stadiums. I am happy to be here and I hope the minister of sports, arts and culture will increase the number of supporters who can go to the stadiums. This will ensure we are able to create big atmosphere and noise at the stadiums.”

Haward Motloung, 45, of Vosloorus said: “It was difficult from March last year not being able to go to the stadium and watch the soccer games. I spend my life at the stadium watching sports, soccer especially. I am not the type of person who spends most of his time at home.

"I go to the stadiums and entertain myself. It was a difficult time not being able to do this. Now we are back and I am excited that I can enjoy myself fully at the stadium, and I encourage other fans to get vaccinated so that more and more of us can go to the stadium.”

While the PSL remains mum about the possibility of soccer fans returning to stadiums, there was a buzz yesterday about vaccinated Bafana Bafana ...
News
2 weeks ago

'Pump it up!' Bafana coach Broos and De Reuck call on the 2,000 fans to turn up the volume against Ethiopia

Bafana Bafana coach Hugo Broos and defender Rushine de Reuck have asked the 2,000 fans that are expected to descend on FNB Stadium for the 2022 Fifa ...
Sport
2 weeks ago
Next Article