State is ready for trial but some accused are not 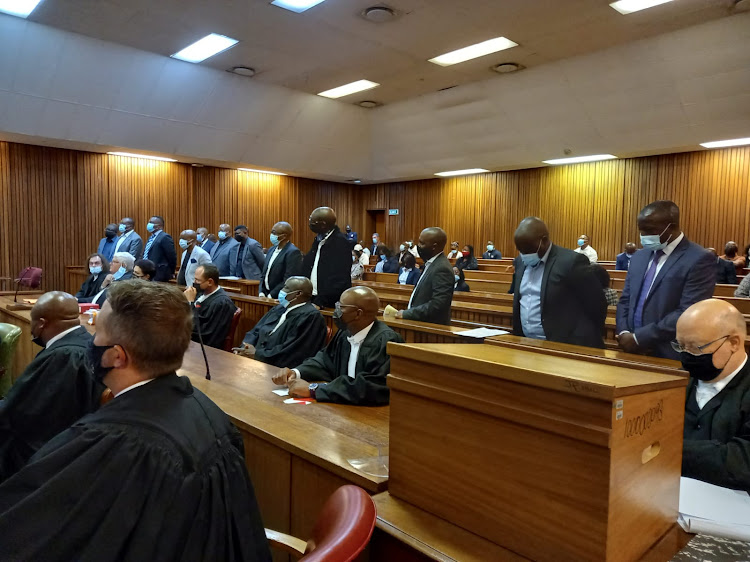 The trial of people accused of looting of the VBS Mutual Bank has hit a snag after lawyers for the defence say they are not ready for trial.
Image: Catharine White

The trial of 14 people accused of the looting of VBS Mutual Bank has hit a snag after lawyers for the defence say they are not ready for trial.

Some of the lawyers representing the accused told the High Court in Pretoria on Tuesday that they were not ready as their clients had not sorted out finances for trial. Others said they still needed more information from the state to prepare for trial.

This caused Judge Hennie de Vos to be concerned on whether everybody will be ready at the same time on a set date for the beginning of trial.

The trial is expected to take about five to six months to conclude due to the amount of evidence that will be presented before the court. This means lawyers representing the accused will have to clear their diaries and avail themselves for half of the year.

Already, the legal teams have had to go through a two terabytes hard-drive containing documents in preparation for the trial.

A man who allegedly took part in the looting of VBS Mutual Bank has been arrested by the Hawks.
News
5 months ago

The state has estimated the case will take two court terms.

They are collectively charged with 188 counts of racketeering, corruption, fraud, theft and money laundering.

They are accused of stealing about R2.3bn from VBS Mutual Bank and doctoring financial statements.

This led to depositors losing their money.

The bank was placed under curatorship in March 2018 following a severe liquidity crisis.

De Vos was firm on that he is not prepared to set the date for trial if some of the defence are not ready.

“We need to make sure that everybody is ready before we set the trial date because it has financial implications to the accused...The other issue is that you [the state] intend using electronic methods to present evidence before the court,” he said.

Prosecutor Hein van der Merwe assured the court that there will be a way of ensuring that everyone can see the documents at the same time.

Van der Merwe said he would arrange for small screens to be installed in court for each of the legal representatives. He said he previously dealt with a matter involving 18 accused and was able to succeed in planning how the proceedings would unfold.

It is alleged that they looted more than R2bn from the now defunct bank between 2015 and 2018.

In 2020, one of the accused in the matter, former VBS Mutual Bank CFO Philip Truter, pleaded guilty in a plea bargain and was sentenced to 10 years behind bars.

Despite today’s delay, there is another hurdle that could cause further delays.

Accused number 11, Msiza, has put in an application to have his trial heard separately from the others. This application is set to be heard in court on November 4. If Msiza’s lawyers lose in their application, they may decide to appeal the decision of the court, which could further delay the beginning of trial.

With all these issues raised, Van der Merwe, however, assured the court that he has established good communications with all the lawyers to address any issues long before the date that the court would set.

“We will  not wait...by the time we all close for December, everybody will know where we are going with the matter. We have a mailing list and have communication with one another. Everyone will be informed and if there are problems they will be communicated…,” he said.

De Vos postponed the matter to Jan. 24 next year, where a date for trial will be set.

Supporters of ANC Limpopo treasurer Danny Msiza say they will be in Johannesburg where he is expected to appear before the Palm Ridge Specialised ...
News
10 months ago

The lawyers of a former ANC youth league leader have confirmed that their client was informed to hand himself over to police by the Hawks on Thursday.
News
10 months ago
Next Article