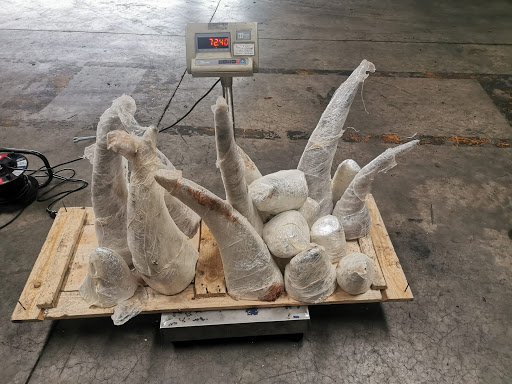 The men were arrested and a vehicle seized by a multi-departmental team. File image
Image: Hawks

An official from the North West department of economic development, environment, conservation and tourism (Dedect) has been arrested in connection with illegal rhino horn trade.

The official and the owner of a security company were arrested on Thursday afternoon, the department of forestry, fisheries and the environment confirmed.

The men were arrested and a vehicle seized by a multi-departmental team comprising members of the department’s Green Scorpions, working in collaboration with the Hawks, the Dedect and the department of environment and nature conservation.

“The suspects are alleged to have conveyed 17 individual detached rhino horns from the Northern Cape to North West in contravention of permit conditions issued by both provinces,” the national environmental department said.

“The men are also alleged to have been involved in the trade in rhino horns using permits to cover up their illegal activities.”

The suspects will appear in the Mmabatho magistrate’s court on Monday.

SA's largest private rhino breeder says he has kept the protected animals safe from poachers for four and a half years but cannot continue if he is ...
News
2 months ago

Three rhino poaching suspects have been arrested in separate incidents in the past seven days in the Kruger National Park.
News
5 months ago
Next Article