Livhuwani Vuma was instead accused of bringing the judiciary into disrepute 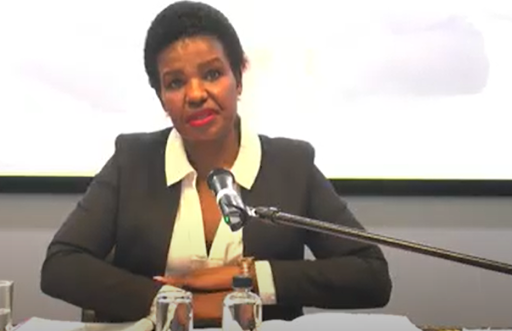 Acting judge Livhuwani Vuma did not make the shortlist for a permanent position as a high court judge.
Image: Screengrab

Pleas for leniency and a chance to prove herself were fruitless for acting judge Livhuwani Vuma on Wednesday as the Judicial Service Commission elected not to recommend her for one of 10 vacant positions as a Gauteng high court judge.

Vuma endured a grilling interview after it came to light that at one point during her stint as an acting judge for urgent matters, she invited lawyers to meet her at a Spur restaurant in Benoni on a Sunday afternoon instead of heading to chambers.

The matter was raised by Gauteng judge president Dunstan Mlambo, who was one of the first to pose questions to Vuma.

“There’s an instance mentioned that you were doing urgent court matters. Your clerk called, asking that you come to court but you were not prepared to do so,” said Mlambo. “You said the parties must meet you at a Spur restaurant and that is where the matter was dealt with. Is this correct,” asked Mlambo.

From there, it was a downward spiral for the aspiring judge who was the last of 17 candidates to be interviewed for the positions.

Age is not just a number. This was the impression given by acting chief justice, Ray Zondo when he interviewed a Gauteng judge-hopeful, advocate ...
News
8 months ago

“Maybe if I can confirm that yes I met the parties at Spur but to say that I refused is not correct. I did not refuse to go to the [court],” she replied.

“It was late on Sunday ... going to evening when I received a call that there was an urgent matter that required my attention. Unfortunately my clerk could not give me much information for purposes of assisting me to apply my mind to what was expected from someone needed to deal with an urgent matter along those lines. There was a back and forth between myself, my clerk and counsel who was bringing the application. At that time, it was around 5pm,” said Vuma.

I can't even imagine a court taking place at a place that sells alcohol. From Spur it goes straight into a shebeen

At that point, the respondent had not been served with notice of the lingering urgent matter, she said.

“We had agreed that it was not a matter that could be brought on an ex parte basis and I insisted that before I meet you, kindly ensure that service has been duly effected. In that process, it grew late and late and late. I then asked my registrar to ask them whether they would not meet me in Benoni and though I appreciate that it should have been that if I cannot make it to the [court], it could have been made at my home — so I was made to understand,” Vuma continued.

“But most unfortunately, there was a function at that time and when I invited them to Spur, I meant no disrespect to them. I never imposed on them that the matter should be held at or entertained at Spur. I appreciate the poor judgment on my part but it was never intended in any way to be an act of disrespect, be it to the judiciary or to the parties,” she added.

“Had the parties expressed their displeasure, I certainly would have weighed my options and I am not saying that justifies what they raise as a concern because I believe this concern is bigger than the parties that were involved in the matter,” Vuma said.

She conceded that the incident affected the image of the judiciary to the public but quickly added that because it was dark, she had been afraid of meeting the lawyers concerned in chambers.

Several legal bodies had raised this particular issue in letters to the JSC upon hearing of her nomination for a high court judge post.

Adding further insult to injury, Vuma did not respond to their complaints.

She told the commission that she was afraid, especially because she would have to “take a guilty plea” when it came to their complaints.

Once these appointments have been made, the president must still fill a further two vacancies and appoint a chief justice before the Constitutional ...
News
8 months ago

Mlambo pressed further, asking her whether she was aware of protocol that she had to alert a senior judge and the judge president or deputy judge president of any sittings she had intended to have outside court.

Vuma said she had informed a senior judge who she was working under.

“I did engage with my senior, informed him of my circumstances and he gave me his consent and, yes, I further accept that at the time, I was not aware that I should have escalated it to the JP or DJP,” she said.

She said ignoring the letters of enquiry sent to her were in no means an indication that she undermined the parties or their concerns.

“You took the court to a place that sells alcohol,” he said in utter shock.

He lambasted her, saying she had brought the image of the judiciary into disrepute.

Vuma tried all she could to salvage the situation, saying she had called ahead at Spur and asked that they reserve a table for her in a non-rowdy part of the restaurant.

“They normally sing happy birthday,” Malema retorted, referring to the birthday jingles that Spur staff would randomly break into when one of their patrons celebrated a birthday.

“Spur, generally, is very rowdy. It is not one of those types of places you would expect that there can be some isolation for a court to sit there. I can't even imagine a court taking place at a place that sells alcohol. From Spur it goes straight into a shebeen,” he said.

Malema described Vuma’s act as “cardinal sin” and further pressed her on why they should proceed with the interview. He gave her the option of recusing herself from proceedings.

The son of anti-apartheid defence lawyer Denis Kuny has been interviewed for a position as a judge in the Gauteng division of the high court.
News
8 months ago

Disturbed by this quest, Vuma, however, stood her ground.

“Thank you for the question, I intend to continue with the interview,” she said after a few moments.

Asked by another commissioner what she had taken from this experience, Vuma said  “everybody makes mistakes” adding that she regretted what had happened. “I am still of the firm view that I am still competent and can be regarded for a permanent appointment. Despite the lapse of judgment at the time, I am still a worthy member of the judicial body,” she said.

“I have become the poster girl of what not to do,” she said, while in the same breath pleading with the commission that this “should not bring a fatality to my endeavours”.

She said considering her for the position would show that the JSC was a forgiving body that acknowledged that everyone was human.