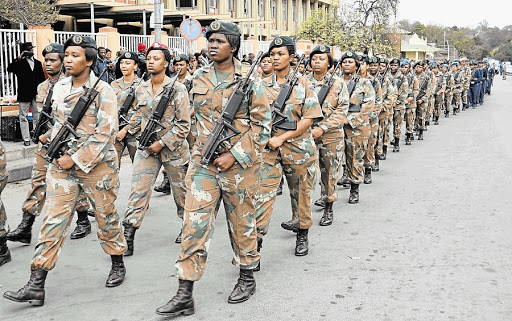 The extraordinary summit of the Sadc organ troika plus the Republic of Mozambique has agreed to extend the deployment of troops to Mozambique to help combat ongoing acts of terrorism.
Image: THE HERALD/LOYISO MPALANTSHANE

The Southern African Development Community (Sadc) bloc has agreed to extend the deployment of standby forces in Mozambique to continue combating acts of terrorism and violent extremism in the country’s Cabo Delgado province.

The Sadc mission was extended to “continue with offensive operations against terrorists and violent extremism to consolidate stability of security and create a conducive environment for resettlement of the population and facilitate humanitarian assistance operations and sustainable development,” said Sadc’s executive secretary Elias Magosi.

Magosi was communicating the outcome of the extraordinary summit of the Sadc organ troika plus the Republic of Mozambique in Pretoria on Tuesday. The summit considered a progress report and assessment of the regional co-ordination mechanism as well as recommendations on a way forward in Mozambique.

It also received a report from Mozambique on their own analysis and assessment and provided a report on their contribution to the Sadc mission with emphasis on progress.

The meeting follows a decision made on June 23 by Sadc’s extraordinary summit in Maputo, where it approved the deployment of a Sadc standby force rapid deployment capability mission in Mozambique from July 15 to combat acts of terrorism in Cabo Delgado.

Magosi said the summit commended the heads of states and their troops for their remarkable achievements made since the deployment of the mission in July.

“Summit urged member states, in collaboration with humanitarian agencies, to continue providing humanitarian relief to the population affected by the terrorist attacks including the intangibly displaced people.”

It expressed its unwavering commitment to continue supporting Mozambique in achieving peace and security in some districts of the central and northern Cabo Delgado province. It also expressed its condolences to the families and governments of Botswana and Tanzania after the deaths of three soldiers during the mission.

In his closing remarks, President Cyril Ramaphosa in his capacity as the chair of the Sadc organ on politics, defence and security co-operation said while progress was registered in the operations of the Sadc mission in Mozambique, more ground needed to be covered. “The next coming months are therefore going to be critical in shaping the future trajectory of the Sadc intervention and districts of Cabo Delgado.”

Ramaphosa said the region had made a meaningful contribution in helping to secure peace and security in Mozambique. “[Mozambican] President Filipe Nyusi, by inviting Sadc to assist Mozambique in its hour of great need, you have afforded Sadc to demonstrate its solidarity with Mozambique and its people.”

Ramaphsoa said Sadc was also afforded an opportunity to demonstrate its commitment to fostering unity and integration of the Sadc community.

“Mozambique will never walk alone, we will always be there to walk with Mozambique and indeed Sadc as a family is determined to walk with any of its member countries whenever the need arises.”

Institute for Security Studies senior researcher Liesl Louw-Vaudran said the extension of the mandate was welcomed, albeit expected.

She said the decision to deploy the force was on June 23 and then the forces agreement was signed with Mozambique on July 2 and they had moved in quickly to set up a base. “At the moment there are troops from Mozambique, Botswana, Tanzania and Lesotho. There is a small contingent from Angola as well. It would have been surprising if they had to end the mission now on October 15 when this first mandate expired.”

However, she said Ramaphosa will have to make some kind of announcement on how long the new mandate will last and the costs implicated with the decision.

President Cyril Ramaphosa said on Tuesday while the political and security situation in the region was relatively peaceful and stable, the Southern ...
News
3 months ago