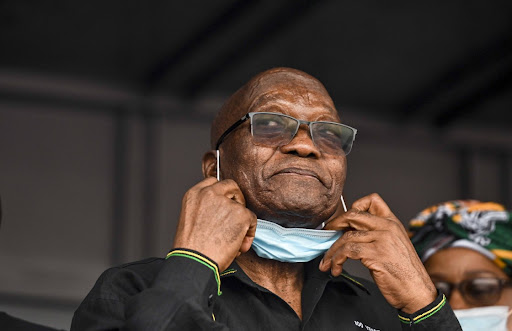 Former president Jacob Zuma has urged South Africans to cast their vote for the ANC in the upcoming local government elections.

Zuma surprised many on Tuesday afternoon when he said this in a video message shared by his foundation.

It had so far been a guessing game on whether Zuma would be campaigning for the ANC,  given the tensions between him and the party’s president Cyril Ramaphosa.

This was also compounded by Zuma’s much felt absence at the launch of the ANC election manifesto in Tshwane last week attended by former presidents Thabo Mbeki and Kgalema Motlanthe.

“It is time for the local government elections. I have been listening and observing for a while and there are a lot of people who say, because of different reasons, they have taken a decision not to vote,” Zuma said.

A national welcome prayer has been planned for former president Jacob Zuma.
News
7 months ago

“This really touched me and I thought I should share my views by asking those who are saying this to say let’s all stand up and vote, and vote more especially for the organisation that brought us freedom: the ANC.”

Zuma said he had heard people saying they would express their dissatisfaction with the government by staying away from the polls. He took issue with this, saying although he was also unhappy with a few things, he would cast his vote.

The former president is out on medical parole after being imprisoned over a contempt of court charge for defying a Constitutional Court judgment ordering him not only to appear before the state capture inquiry but to answer questions put to him.

“It is important for us to do this. Perhaps even I’m not happy with a few things, but I am going to vote. If we do not vote, we will be shocked when we no longer have a nation, no power to change people’s lives. I say please reconsider and vote. Thank you. Let’s go out and vote,” he said.

Zuma and some of his disgruntled allies and supporters have not been vocal about campaigning for the ANC.

They were seemingly waiting for Zuma’s “marching orders” on whether they should campaign. It is expected they will now be seen campaigning for the ruling  party.

Only Carl Niehaus, whose party membership was recently reinstated, has made his intentions clear, saying he would campaign for the ANC.

Some Zuma allies, including suspended secretary-general Ace Magashule, have not been seen.

No, Zuma will not address his supporters at Nkandla, says foundation

Jacob Zuma's foundation said the report was “fake news” and an “unnecessary invasion”.
News
7 months ago

The North West government has abandoned the R1.8m monument in Groot Marico erected five years ago to honour former president Jacob Zuma, who along ...
News
8 months ago
Next Article