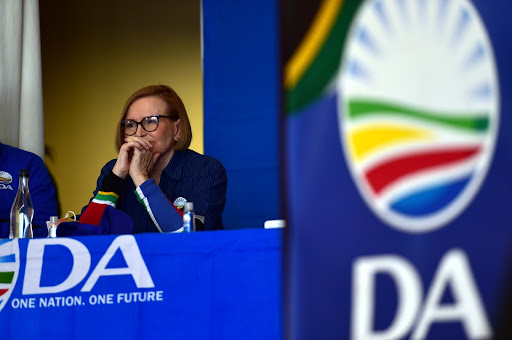 DA federal council chair Helen Zille will be based in Nelson Mandela Bay until after the November 1 elections, to push the party for an outright win.

She announced this at the party’s manifesto launch for the Bay on Monday at the Helenvale Resource Centre in Gqeberha.

While the DA governs the metro through a coalition, Zille said smaller parties were a distraction. Referring to the Patriotic Alliance (PA), Northern Alliance and the Defenders of the People (DOP), Zille said the parties were just extensions of the ANC.

“EFF leader Julius Malema says he welcomes parties such as the PA, Northern Alliance and DOP because it means these are votes taken away from the DA,” she said. “I agree with him because some of these parties are targeting wards that are almost evenly split.

“There are only two big parties and one choice to be made. The choice is between the yellow party and the blue party. The blue party is the colour of honesty,” Zille said.

Cassim said coalitions were a danger.

“When we came back in December, we realised our city was on the brink of collapse. No contracts such as grass cutting in place. There were no light bulbs, black plastic bags,” he said.

“This happened under the coalition of corruption.”

Steenhuisen said the DA’s manifesto for the Bay was not a wish list.

“Our manifesto takes into account all the real-world constraints like budgets, human resources, backlogs and maintenance neglect. It’s a workable, realistic plan built on a foundation of the many successes we have already achieved in local government, a record of action and a promise of more,” he said.

Bhanga was in high spirits, dancing and singing at the event. He urged residents to give the DA the majority to govern.

African Democratic Change leader Visvin Reddy has rubbished claims by the ANC which suggest his party was fuelling racial tensions with a recent ...
News
2 months ago

ANC will investigate candidate list process 'thoroughly', but only after elections, says Ramaphosa

ANC President Cyril Ramaphosa has promised supporters that the ruling party will investigate any fraudulent activities that may have taken place ...
News
2 months ago
Next Article