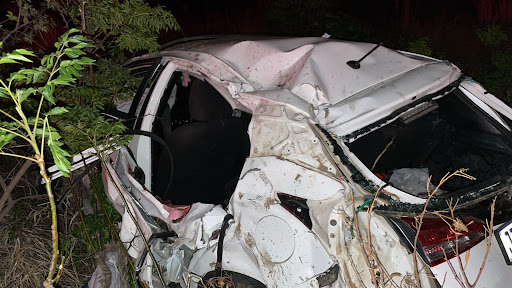 A child died in a serious crash in Lanseria on Sunday night.
Image: Emer-G-Med

A child was killed in Lanseria on Sunday night after a crash on the N14.

One of the four adults was in a critical condition and advanced life support paramedics had to stabilise him before he was airlifted to a nearby specialist facility. Three others were treated for moderate injuries and were taken by ambulance to a nearby hospital for further care.

“Sadly the minor was found to have suffered fatal injuries and there was nothing paramedics could do to assist. The patient was declared deceased on arrival,” said Emer-G-Med.

Police are investigating the crash.

Family spokesperson Tshegetso Boekhouer said the accident happened around 3am when the couple was driving home from an after tears.
News
2 months ago

A woman was killed, and a one-year-old child and four adults were injured in a head-on collision on the N12 highway near Fochville on Saturday ...
News
2 months ago

Narrow escape for drivers in head-on collision on wet road

Two motorists involved in an early morning head-on collision, that left their cars virtually unrecognisable, escaped the wreckage with only minor ...
News
2 months ago
Next Article