As President Cyril Ramaphosa moved SA to lockdown level 1 from Friday, he announced that the health department was gearing up to issue mandatory vaccination certificates for travel and access to gatherings. 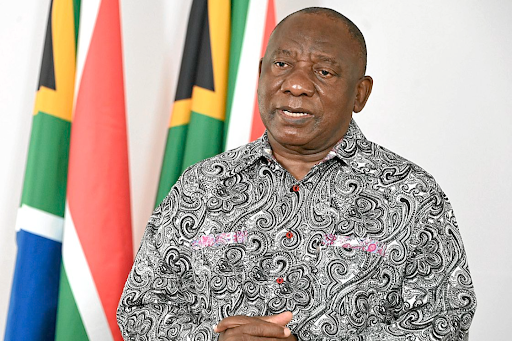 President Cyril Ramaphosa says he wishes he could lift the national state of disaster.
Image: GCIS

As many as 20,000 lives could be saved if the majority of the country's adult population received their Covid-19 vaccines, President Cyril Ramaphosa said on Thursday as he pleaded for all citizens to do their bit.

For this reason, the country will embark on a mass vaccination drive which will allow people to receive their jabs on weekends. Ramaphosa, his deputy David Mabuza, and other officials were expected to mobilise communities to take their jabs as the “Vooma Vaccination Weekends” programme kicks off from Friday.

During his address to the nation on Thursday night - during which SA was moved to lockdown level 1 for the first time since the end of May 2021 - Ramaphosa said that the intensified vaccine rollout comes in line with health department plans to roll out vaccination certificates that provide verifiable proof that the Covid-19 shots had been administered. These certificates will be used to facilitate travel and access to establishments and gatherings, among other activities, he said.

“We have set ourselves the target of vaccinating 70% of the adult population in SA by the end of the year. If we reach this target, the department of health estimates that we could save up to 20,000 lives. That represents 20,000 people — mothers, fathers, sons and daughters — whose deaths can be prevented if the majority of us chooses to get vaccinated,” he said.

To reach this ambitious target, SA will have to administer an additional 16-million vaccine doses this year, which amounts to about 250,000 first-dose vaccinations every day until mid-December, according to the president.

More than 17-million vaccine doses have been administered to date, with 8.6-million people fully vaccinated - more than one-fifth of the adult population.

“Vaccination is our best defence. If we can reach vaccination targets by the end of this year, we can avoid further restrictions and move our economy recovery into high gear,” he said.

Ramaphosa appealed to adults to take up the opportunity to vaccinate so they would not only protect themselves, but also their loved ones.

“Getting vaccinated is not only about protecting oneself and those about you, it is also about preventing new and more dangerous variants from emerging as the virus is able to spread and mutate in unvaccinated populations.

“However, we should remember that even if we are vaccinated, we need to adhere to the basic precautions to limit the spread of the virus from one person to another,” he said.

The sale of alcohol is now permitted from Monday to Sunday as SA moves to lockdown level 1 from Friday.
News
3 months ago

The president was impressed with the country’s national vaccination drive which he said had been gathering pace.

While concern has been raised on the vaccination certificates, Ramaphosa said the move was in line with World Health Organisation (WHO) guidelines and international best practice.

“Streamlining and standardising proof of vaccination will also go a long way towards getting a number of international travel restrictions both from and into our country eased,” he said.

As the country moves to level 1 from Friday, October 1, Ramaphosa said it would be necessary for more people to vaccinate in order for life to return to normality and for economic recovery.

“Our greatest priority now is to ensure that the economy recovers as quickly as possible, so that we can create jobs and help businesses to get back on their feet. The only way that we can do this is if more South Africans choose to get vaccinated, more quickly.

“If the majority of our population is vaccinated, we can declare SA to be a safe destination and welcome tourists back over the summer season. We can resume sporting events and concerts, lift restrictions on restaurants and bars, and encourage people to return safely to their workplaces, shops and public spaces,” he said.

The president was confident SA would avoid further restrictions if it met its vaccination target by the end of the year.

Gauteng is ready to move to level 1, says David Makhura

Prof Shabir Madhi says reaching herd immunity is not the reason for vaccinating people against Covid-19.
News
4 months ago