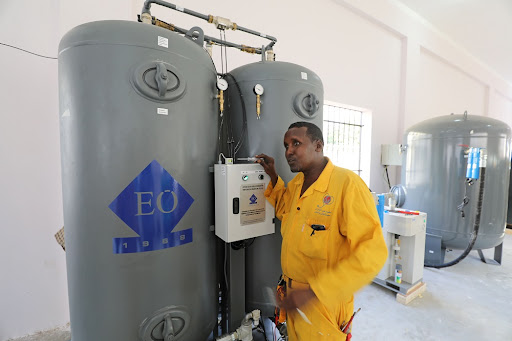 Somalia's first public oxygen plant opened on Thursday, in a ray of hope for a country where a lifesaving treatment for the coronavirus has been largely unavailable to patients during the pandemic.

Global demand for medical oxygen has surged with the COVID-19 pandemic, and many countries have experienced desperate shortages.

This and a lack of other equipment mean Africans seriously ill from COVID-19 are more likely to die than patients elsewhere, according to a study published in May by medical journal The Lancet, which cited data from 64 hospitals in 10 countries.

The new plant in Mogadishu was purchased for 282,000 euro ($240,700) from Turkey by the Hormuud Salaam Foundation, established by the country's largest telecoms company, Hormuud.

While President Cyril Ramaphosa has welcomed the US’s commitment to donate an additional 500-million vaccine doses to low-income countries, he said ...
News
1 month ago

When Yaseen Theba looked at the long row of vehicles that were lined up at the Houghton Masjid, Johannesburg, on a bitterly cold Saturday morning, he ...
News
1 month ago

It will be installed at the Banadir Maternity and Children Hospital, where the foundation has also funded the repair of its COVID-19 ward.

The wing and the hospital's outer wall were partially destroyed during a nearby attack in July by Islamist al-Shabaab militants, who are fighting to overthrow the government.

Medical oxygen production needs experts to operate and maintain equipment. It also requires reliable electricity and water supplies, which most Somali public hospitals do not have.

Other countries, such as India, suffered severe oxygen shortages during surges in COVID-19 infections, forcing desperate families of patients to pay exorbitant prices for cylinders.

"One cylinder of oxygen usually costs around $50 in Somalia but can reach up to $400 or $500 (at private hospitals) because of the shortage," said Abdullahi Nur Osman, CEO of Hormuud's foundation.

He said the oxygen will be distributed among the public hospitals in the capital Mogadishu free of charge.

As of Wednesday, Somalia had reported nearly 20,000 COVID-19 cases and 1,100 deaths, according to the World Health Organization, but figures could be far higher due to inadequate testing and unreported deaths.

Only 1% of Somalia's 15 million citizens are fully vaccinated, reflecting inequities in vaccine distribution that the World Health Organization warns will prolong the pandemic, which has already claimed nearly 5 million lives. ($1 = 1.1714 euros)

A study of patients treated for Covid-19 at a Wuhan, China, hospital has found that some continue to battle with health impairments a year after ...
News
1 month ago

Kenya's oxygen production firm Hewatele is doubling production this year to keep up with surging demand from hospitals that are treating critically ...
News
2 months ago
Next Article