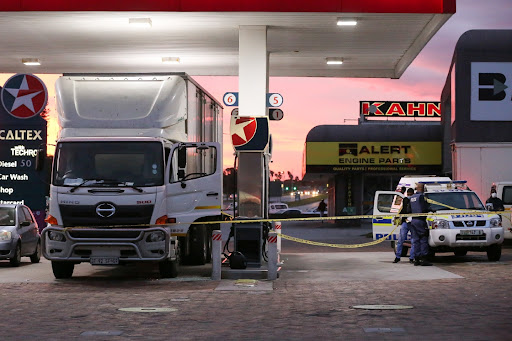 The SAPS cordon off the scene of a robbery at the Caltex filling station in Cape Road. Pierre Potgieter, who chased after the suspects, died in hospital on Wednesday.
Image: Werner Hills

A man tragically died on Wednesday after he was shot while chasing after a group of robbers in Gqeberha.

Pierre Potgieter, 39, sustained a gunshot wound to the head while trying to chase down the suspects fleeing from a robbery scene on Tuesday evening.

The suspects allegedly robbed a truck driver and his passengers at a petrol station in Cape Road.

Police spokesperson Col Priscilla Naidu said the dramatic scene unfolded at about 4.20pm when two armed suspects allegedly approached a truck being refuelled and tried to open the door.

They opened fire on the truck, wounding two passengers before taking an undisclosed amount of cash and a cellphone.

One suspect fired a shot at Potgieter, hitting him in the head.

“It is further alleged that four suspects then ran off in different directions, and Potgieter chased after the suspects in his bakkie.

“At the corners of Frank Street and Sixth Avenue, one suspect fired a shot at Potgieter, hitting him in the head,” Naidu said.

Mount Road police’s Crime Prevention Unit canvassed the area and received information that another suspect was seen getting into a white VW Polo.

A Polo matching the description was stopped in Mill Park and officers learnt that the suspect left the vehicle near the Netcare Greenacres Hospital in Cape Road. The suspect was spotted running into the hospital premises where officers managed to execute an arrest.

The 37-year-old suspect was found with a revolver in his possession.

The driver of the Polo, 28, was also arrested and the vehicle was impounded.

A murder investigation is under way after a couple died in a hail of bullets while travelling in a Ferrari in Soweto.
News
4 months ago

Potgieter succumbed to his wound at about 1.40am on Wednesday morning.

Naidu said cases of armed robbery, murder and two counts of attempted murder are being investigated against the 38-year-old and 37-year-old suspects as well as charges of illegal possession of firearms and ammunition.

Further investigation is also under way to establish if the 28-year-old suspect is linked to the robbery.

“Our condolences to the family of Mr Potgieter on his tragic passing. Unfortunately, we have criminals in our society who have absolutely no regard for the patriotic duty discharged by law-abiding citizens.

“We will be working very closely with the prosecuting authority to ensure watertight cases against these alleged criminals,” Ngubelanga said.