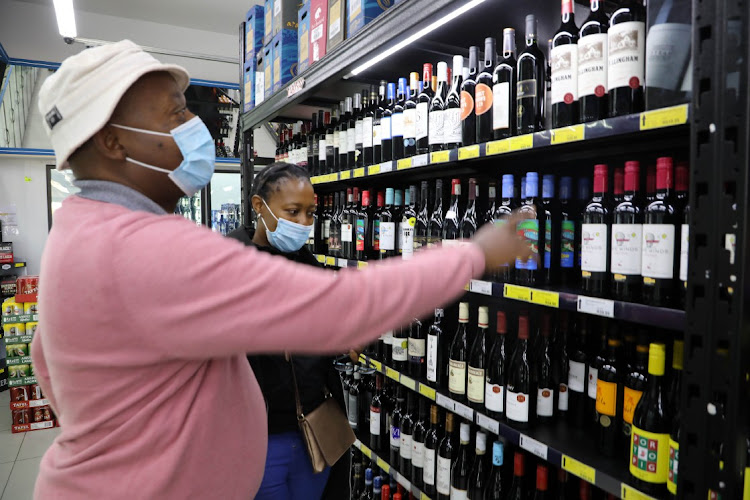 Customers buying alcohol at Liquor City in Florida earlier this year in this file picture. President Cyril Ramaphosa has announced that liquor traders will now be able to sell drinks everyday of the week.
Image: Antonio Muchave

The sale of alcohol is now permitted from Monday to Sunday as SA moves to lockdown level 1 from Friday.

This was announced by President Cyril Ramaphosa when he addressed the nation from the Union Buildings on Thursday evening.

Ramaphosa announced that indoor gatherings will now be allowed to accommodate up to 750 people from 250, while outdoor gatherings can have  up to 2,000 people.

The attendance of funerals will be allowed for up to 100 people from 50, while night vigils and after-tears parties remain prohibited, said Ramaphosa.

The curfew will now move to midnight, while bars, restaurants and night clubs can open until 11pm to allow employees to get home before midnight.

"The current trends in the progression of the pandemic mean that a number of the restrictions in place can be eased, as per the recommendations of the Ministerial Advisory Committee on Covid-19. Following meetings of the National Coronavirus Command Council and the President’s Coordinating Council, cabinet has decided to move South Africa from adjusted alert level 2 to adjusted alert level 1 from midnight tonight," Ramaphosa said.

"The sale of alcohol – for both off-site and on-site consumption – will be permitted, according to normal licence provisions. However, no alcohol may be sold after 11pm."

Ramaphosa said the third wave of the pandemic took longer than the previous first two waves, however, the levels of infections, hospitalisation and deaths have drastically dropped in all provinces.

The president said the country has made strides when it comes to vaccination with more than 17 million doses having been administered.

More than 8.3 million people in the country are now fully vaccinated, while 30% of the adult population has received at least one Covid-19 vaccination dose.

Ramaphosa announced a drive to be launched to accelerate the vaccination drive in the country.

"Tomorrow, the 1st of October and on Saturday the 2nd of October, we will be opening vaccination sites around the country to reach over half a million people. The department of health has identified priority districts in each province based on the number of unvaccinated people and the current vaccination coverage in each district," said Ramaphosa.

Ramaphosa said he had spoked with UK Prime Minister Boris Johnson about SA being placed on travel red list by his country.

"Earlier today I had a call with the British Prime Minister Boris Johnson to discuss this matter. I put South Africa’s case to him, which he understood very well. We both agreed that decisions of this nature should be informed by science and are hopeful of a positive outcome when the issue comes up for review in the coming days," he said.

He admitted that the travel ban on South Africans by the red listing has put SA in a disadvantaged position, "since the United Kingdom is South Africa’s biggest source of tourism from the northern hemisphere and a significant trading partner."

"While UK scientists were concerned about the presence of the Beta variant in South Africa, the reality is that the Delta variant is now by far the dominant variant in the country," he said.

Ramaphosa announced that SA will soon introduce a Covid-19 vaccination certificate that will be used to allow access and travel among others.

"The department of health will soon be rolling out a vaccination certificate, which will provide a secure and verifiable proof of vaccination. It can be used to facilitate travel, access to establishments and gatherings and other forms of activity that require proof of vaccination status. Our approach is informed by World Health Organisation guidelines and is in line with international best practice."

The making of Umqombothi – the traditional African beer – is set to leave a bitter taste for drinkers and brewers who produce the drink for ...
News
3 months ago

Can drinking alcohol protect you from Covid-19?

Don't be fooled: drinking alcohol offers no protection against Covid-19
News
3 months ago
Next Article