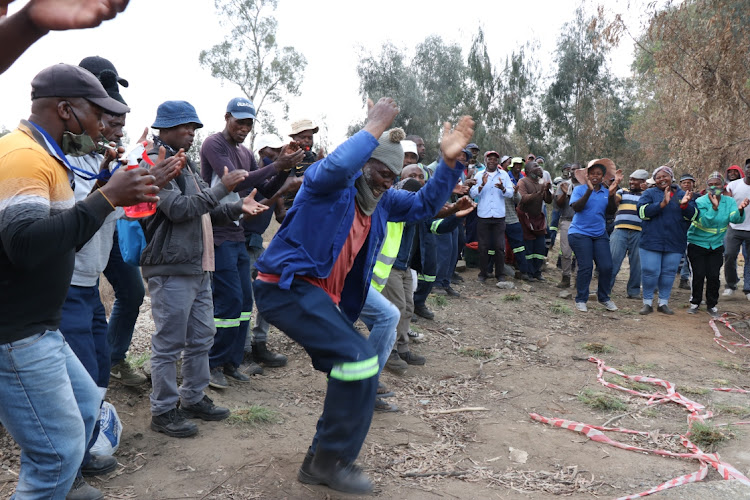 Employees at Elematic SA protesting outside the company's premises in Brakpan as the strike has entered its second week.
Image: Tebello Potlwane

More than 200 workers from Elematic SA manufacturers have entered the second week of a strike over salary hikes and provident fund benefits that has led to the death of one worker.

The strike started on  September 14 outside the offices in Benoni on the East Rand.

Shop steward Thulani Nkuna said the workers had longstanding issues which have not been resolved in three years.

"We, together with our union, have been trying to negotiate unsuccessfully with our employer on issues regarding a wage increase that has been long overdue. Covid-19 has made things worse for all of us but we have worked nonstop and a 3% increase is not enough, said Nkuna.

He said the company had not registered employees for a provident fund.

"We only get tax deductions and fear that we will get old working for this company and nothing to show for it. The management does not take us seriously despite our long service. Some of us have been here since 2017 but nothing has improved."

Nkuna said that last week Wednesday, his colleague Jackson Masemola, who was part of the strike, was shot dead allegedly by police.

"Our strike is protected. A peaceful one with no vandalism nor violence but they arrived and chased us into the bushes. As we ran, we did not realise that Masemola was missing. We only realised it the next day. We went back to the bushes and we found him lying dead with gunshot wounds in his back and head."

The deceased's brother Thulani Masemola said his family was distraught.

"It's sad that he died fighting for better benefits to be able to provide better for his family."

Duduzile Ndlangamandla, a single mother, said she was battling to survive and feed her children because of the low salary she was getting.

Elematics SA CEO Craig Webber said the company had no interest in speaking to the media on the issues for now.

"The relatives of the deceased man contacted us. We followed up the matter and found that unfortunately a postmortem had already been performed without contacting the police. We sent investigators who discovered cartridges and rubber bullets on the scene just 100 metres from the company's entrance."

Langa said investigations were ongoing and their detectives were following strong leads.

"The information at hand suggests that a metro police office had fired the deadly shot. However, we are waiting for a ballistic report to know where to point fingers."

Engineering sector workers have announced plans to take to the streets in a nationwide strike next week after wage increase negotiations deadlocked.
News
7 months ago

Numsa will stage a national strike in the country's engineering sector from October  5 after wage talks reached a deadlock, the union said on Tuesday.
News
7 months ago
Next Article