Tshepo Motaung was gunned down, triggering concerns that his death was politically-motivated

At least three Tshwane councillors have fled their homes out of fear their lives would be brutallyput to an end.

This is according to Gauteng premier David Makhura, who was speaking outside the home of slain Tshwane ward 22 councillor Tshepo Motaung on Tuesday. Motaung was shot more than 20 times on Friday.

Political killings, said Makhura, had increased to “new levels” in the past two months.

“A lot of our councillors feel unsafe in these communities. In fact, on my way here I was told three councillors are not staying at their homes. They have moved from their homes because they feel unsafe and that they could be attacked and killed,” Makhura said.

The matter would be escalated to police minister Bheki Cele, who was also part of the delegation that visited Motaung’s family on Tuesday. 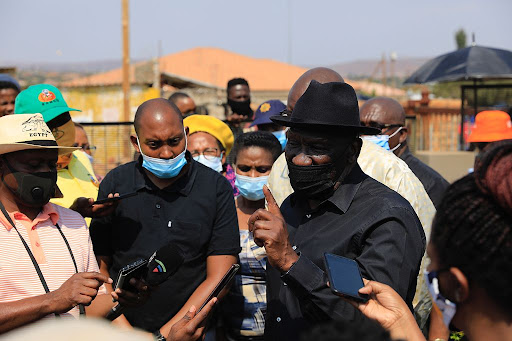 Makhura called on police to handle the killings in the same way political violence was handled in Cele’s home province of KwaZulu-Natal.

“From what we see in this [Motaung] case, it is linked to matters of political contestation, and it is something that is looking like other incidents in our province, and in parts of Tshwane in particular. We have also asked the minister [Cele] to put up a serious team to probe this and bring the perpetrators to book,” Makhura said.

“We have to respond likewise, as the police,” he said.

The minister said arrests were imminent.

However, despite the apparent links to political violence, the minister said police “are not looking at any political faces here”.

Almost as evidence of the ever-growing political tensions, a scuffle broke out at the home during Tuesday’s visit when an apparent rival politician showed up. She was chased away by angry community members.

Patrick Kabini, an ANC member who was present at the house, said shortly before Motaung’s death, he was announced as the ward councillor candidate for the November 1 local government elections. In fact, the announcement was made the same day Motaung met his gruesome end.

“There were processes to elect councillor candidates for the 2021 elections. Fortunately for Tshepo, the process favoured him and he was declared the ANC candidate on Friday in ward 22. Unfortunately, late on Friday he was killed.

“It doesn’t take a scientist to figure out that if someone is killed, automatically someone must follow him to be the [new] councillor candidate. That’s why we are saying  the murder might be politically-related,” he said.

Kabini said some ANC members were scared as there were rumours about a “hit list”.

“We dont know who or how many people are there [on the list]. We are scared. We are even scared to go outside because we don't know if we are part of that list.”

Makhura said he was disturbed by the number of violent incidents in the province, particularly in Tshwane.

“These incidents of violence and killings have already resulted in the loss of life of a number of councillors in this area. 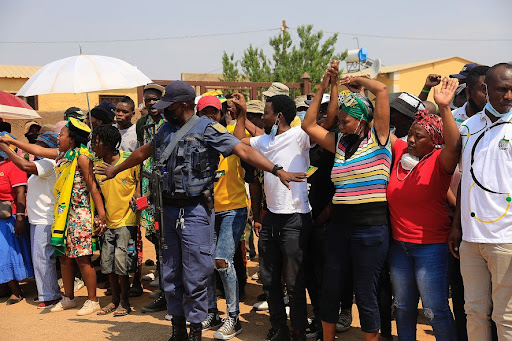 A police officer tries to control a group of protesting community members outside the home of slain ANC councillor Tshepo Motaung on Tuesday. A high-level delegation visited the family after Motaung was brutally killed on Friday.
Image: Alon Skuy

However, said the premier, it wasnt only  councillors who were afraid of being targeted, but also members of the communities.

“They are threatened by these criminal gangs,” he said.

He said these individuals were disrupting community meetings and targeting those who disagreed with them, sometimes killing those they considered to be foes.

Makhura said Motaung was the third councillor to die in the area, “but not recently”.

“We have had councillors shot under circumstances that are mysterious,” he said, without providing further details.

Miranda Mabasa, who had worked with Motaung for seven years, described the councillor as a “cheerful giver”.

“We hope they will find his killers. They killed him like a dog. I was at the scene and at the hospital. I witnessed everything, so I was traumatised.

“I can't eat. I can't sleep. I saw everything, saw him lying in a pool of blood. Bullets were all over, blood was all over. I was so shocked to see him like that because he is a person who lived in peace and was good to everyone,” she said.

Mabasa said she was heartbroken at the loss.

“The flashbacks don’t leave me.”

“We are hoping the minister will close the case very soon and find the perpetrators and the big fish and find out why they did this so that we will have closure as a family,” he said.

“We will not rest until justice is done. If it's not done within one month, that means the community must protest again,” he said.

Hundreds of Chatsworth households woke to dry taps on Monday as technicians attempted to repair a water pump in Northdene.
News
9 months ago

Curbing outbreaks: Zweli Mkhize on what next in SA's fight against Covid-19

SA's health minister explains the work government is doing behind the scenes as it prepares for a staggered easing of the Covid-19 lockdown ...
News
1 year ago
Next Article