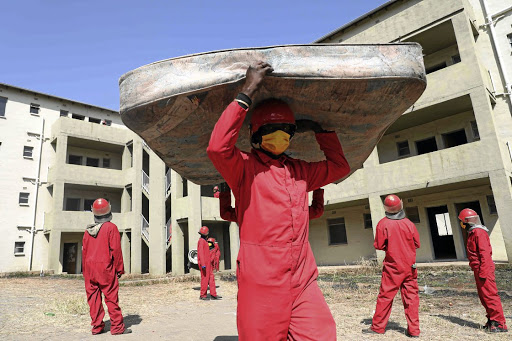 The City of Johannesburg hired the Red Ants to evict people who had occupied housing units in Fleurhof in this file picture. The Red Ants were at it again on Tuesday, removing people who had illegally occupied flats owned by the SABC.
Image: Thulani Mbele

More than 100 Mahikeng residents in the North West were left stranded on Tuesday after the Red Ants evicted them from an SABC block of flats and houses previously owned by Bop TV.

Children who were ready to go to school watched as their families' valuables were taken away. The occupants said they could not go to work as a result of the eviction.

The group occupied the flats in May after the SABC sold them to a private company. They said they were not happy that the SABC took that decision without properly consulting the community.

In a call for the government to protect the flats and other buildings constructed during the Bophuthatswana era, residents occupied the place.

They said they heard that there was a court order to evict them but they should at least have been warned so that they could remove their belongings.

A security guard, Sello Maleke, said he lost his goods during the eviction. “I just bought a new bedroom suite. It’s a big loss for me as I worked so hard to save money for that bedroom suite,” he said.

Maleke said he previously lived in Dibate Village but took the opportunity to occupy one of the flats after he learnt that residents were taking over the residential area.

More than 200 people who invaded flats in the municipal social housing projects in Mamelodi East are refusing to vacate the building despite last ...
News
1 year ago

“I am just a security guard. I do not earn much. I have applied for an RDP house but I have been on the waiting list since 2016. I know it was wrong [to occupy the flats] but I needed a place to stay,” he said.

The occupants' spokesperson Lungile Mtatiwane said they were saddened by the move. “We woke up with heavy hearts. They came and destroyed our things without warning us. The SABC is fighting us,” he said.

Community leader Neo Morweng said the occupants have lost their battle to occupy the flats.

“This shows that our political leaders lack the will to govern. We have witnessed these cruel evictions before, and we call on the Mafikeng local municipality to implement a serviced stands programme to help people who find themselves in similar situations,” he said.

He said Mahikeng has a lot of backroom dwellers and people who live in government-owned properties. .

The SABC was granted an order by the North West High Court to evict the occupants last month. The public broadcaster said it decided to dispose of 20 houses and 60 flats and some of its non-core assets as part of the turnaround strategy.

SABC corporate affairs and marketing manager Gugu Ntuli confirmed that the North West sheriff of the court executed the eviction order. She said the process of transferring the properties to new owners was under way and that they were trying to protect them from illegal occupation.

“The SABC is in the process of disposing all its non-core assets, the bulk of which are residential properties owned by the public broadcaster in various provinces, including the North West province," she said.

Ntuli said the eviction came as a result of numerous court applications that were instituted by the illegal occupants in an attempt to halt the eviction process.

A LEGAL case between the North West government and MR Properties has been dismissed with costs by the Mmabatho High Court. The case was lodged by MR ...
News
9 years ago

Flats that cost the government nearly R190m have been illegally occupied

Hundreds of unfinished flats in Olievenhoutbosch Extension 37, near Centurion, which cost the Gauteng provincial government nearly R190m, have been ...
News
8 months ago
Next Article