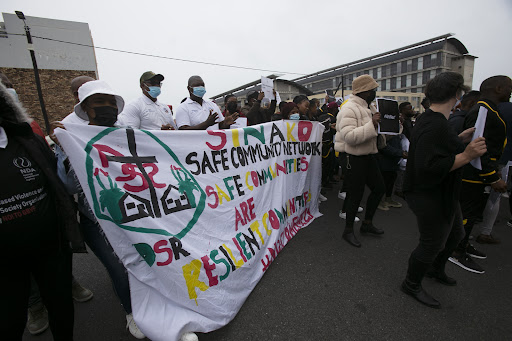 A crowd outside the East London's Magistrate's Court protest against gender-based violence during the appearance of Alutha Pasile, who stands accused of the murder and dismemberment University of Fort Hare law student Nosicelo Mtebeni.
Image: Michael Pinyana

The murder case of Alutha Pasile, who is accused of the murder and dismemberment of University of Fort Hare (UFH) fourth-year LLB student Nosicelo Mtebeni, 23, was postponed to November 9 at the East London Magistrates Court on Tuesday morning.

Pasile, who abandoned his bail application on August 23, made a brief appearance in front of A court magistrate Annemarie Elliot who postponed the case for further investigation.

Alutha hardly uttered a word during his short appearance as he only responded to Elliot's questions by nodding. He maintained his decisions of opting to represent himself and not to apply for bail.

Gents we don’t own women, stop calling them 'our women'

As men, it is about time that we realise the consequences of referring to women as “our women” and how we commit to protecting “our women” against ...
Opinion
11 months ago

The room was full of journalists from across the country and a crowd of mostly UFH students and staff gathered outside the court, singing songs, and holding placards to demand for justice.

Also present at court was MEC for Social Development Siphokazi Mani-Lusithi, who addressed the crowd after the postponement, as well as well-known Children's rights activist Petros Majola, from the Khula Community Development Project.

Pasile was arrested in August at his flat after Mtebeni’s dismembered body was found in a suitcase and black back on a Quigney pavement.

He faces a charge of murder.

There was a heavy police presence in the court precinct with controlled access to the courthouse.