Inquiry to be held into Angelo Agrizzi's medical condition in November 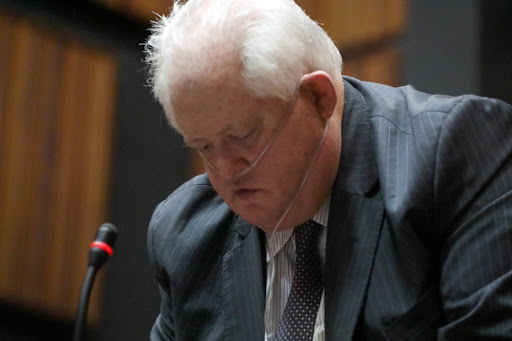 Former Bosasa COO Angelo Agrizzi when he made his only appearance in his corruption trial with co-accused Vincent Smith in October last year. An inquiry will be held in respect of his medical condition in November.
Image: ANTONIO MUCHAVE/SOWETAN

The corruption case of former Bosasa COO Angelo Agrizzi has been postponed until November for an inquiry into his medical condition.

Agrizzi was formerly charged with former parliamentarian Vincent Smith for corruption, but their trials were separated in August due to Agrizzi's continued ill health. Smith also faces a charge of fraud.

Agrizzi took ill when he first appeared in October last year when he was denied bail.

He was released on bail by the high court in Johannesburg later that month while still in hospital where he spent 59 days.

Witz said since Agrizzi was released from hospital, he had been reliant on a permanent oxygen supply.

Witz said the defence team had informed the state about Agrizzi's condition during a Zoom meeting in the presence of his doctor.

After the briefing the state requested the doctor put “something in writing”.

“The state now wants, notwithstanding they have a full medical report, to subpoena the doctor. They want an inquiry to hear what the doctor has to say,” said Witz.

Vincent Smith opts not to challenge order freezing his assets

Former ANC MP Vincent Smith‚ his family and company Euro Blitz 48 (Pty) have decided not to oppose a restraint order that froze assets worth R46m ...
News
2 months ago

Magistrate Phillip Venter postponed the matter until Nov. 2 for that inquiry to be held into Agrizzi's health.

The corruption charge both men face stems from Bosasa, through Agrizzi, allegedly offering Smith gratification in the form of security upgrades to his Gauteng home and Smith’s acceptance of cash transferred into his personal bank account via the account of his company, EuroBlitz.

There were also alleged payments to Smith in exchange for the use of his political influence as an MP for the ANC to shield Bosasa from accountability for corrupting officials in the department of correctional services who awarded Bosasa contracts worth billions of rand.

Smith’s fraud charge emanates from his failure to disclose to the registrar of parliamentary members’ interests the gratification received from Bosasa.