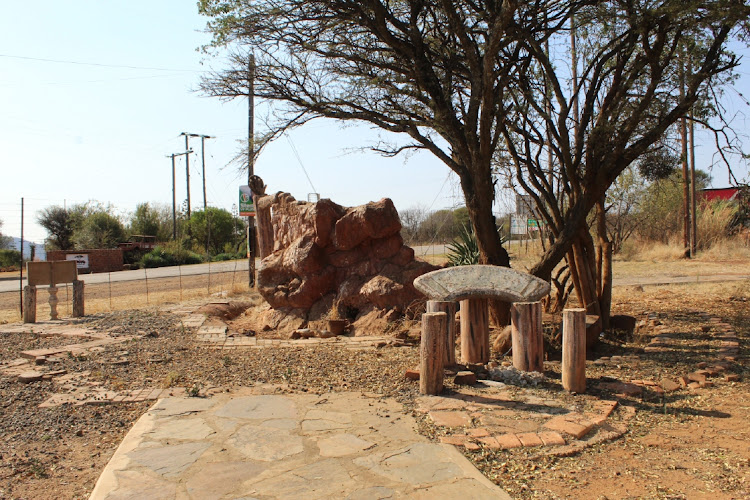 The Jacob Zuma site of arrest in Groot Marico in the North West leaves much to be desired.
Image: Boitumelo Tshehle

The North West government has abandoned the R1.8m monument in Groot Marico erected five years ago to honour former president Jacob Zuma, who along with Umkhonto weSizwe guerillas was captured by the apartheid regime at the site.

The site where the towering bronze statue of Zuma sits has now fallen into disrepair, neglected, locked from the public and abandoned to time. It was unveiled with pomp and ceremony in 2017 and said to form part of the Liberation Heritage Route.

But the decay around the 6m-tall oblique with Zuma’s head has been so bad that the wind has blown away the windmill erected near the old bakkie symbolising the apartheid police.

The bakkie itself was taken off its stand because the tyre stand had apparently not had correct measurements.

A fireball is still intact, with eight walls that tell the life of Zuma surrounding it.

The cultural village and the two huts, the kgotla and the toilets, are in ruin, dirty and not functioning because the place no longer has anyone taking care of it and it does not have electricity.

The waterfall, which used to have the head sculptures of Zuma's ex-wife Nkosazana Dlamini-Zuma, Oliver Tambo and Supra Mahumapelo, is not functional. The busts have since been taken away after the unveiling.

North West arts, culture, libraries and archives chief director Thabo Mabe said even though there were two phases to be done at the site, they had realised that it did not form part of three nationally approved projects for the Liberation Heritage Route.

He said instead of leaving it to total waste, his department had decided to allow it to be run by a provincial heritage agency.

“The initial plan, which is still on course, is to turn it into a museum,” he said. “The museum that we are looking at is not a museum about Jacob Zuma only, it’s a museum that is going to depict the Groot Marico area and the Liberation Heritage Route.”

Mabe said the national government had already approved three projects  for the Liberation Heritage Route and the Zuma site of arrest was not part of those projects. “But because it is almost on the same route we as a province have decided to include it provincially within the route,” he said.

“Initially, they wanted to make just a monument but we said the hall can become a museum but in order for it to be a museum it needs to be curated and within our structure. We do not have a curator.”

He said it would be a long process to ultimately change the look and feel of the structure. “We have entered into an agreement with the provincial heritage agency to manage the site. The place is not complete, we still need to build crafters’ stalls,” he said.

Mooki Maipato, a resident in the area, said the site had only been operational for a little while after the unveiling. “You cannot see the bright orange light on Zuma’s head anymore at night. It’s dark. You would hardly recognise that it’s such an important site,” he said.

He was referring to the 6m Zuma oblique, which used to illuminate at night, creating interest for people and motorists passing along the N4 highway between Rustenburg and Zeerust.

The project came with a promise of jobs for residents of the small town of Groot Marico through tourism.

“The contracts of people who used to work here have expired. The place only exists for us to protect the building. No official is working here,” a security guard told Sowetan.

Mabe said the positive thing that they had done was to have hired six people on contract over the past two years.

“We have employed people there but their contracts ended. So we decided that this is not working. Hence no one is employed there now. We are planning to permanently hire four people on site through the provincial heritage agency and somebody who will be working mainly on the curating part of the museum,” he said.

He said they have plans for this quarter to repair the windmill and fix the toilets. “Electricity has been a problem within ourselves and the district council but we are working on it as well,” he said.