'We are not voting for the ANC': Residents air grievances with Ramaphosa in Thembisa 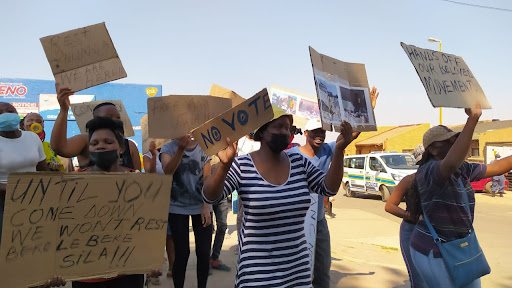 Grievances raised by residents include a lack of services in the area.
Image: Amanda Khoza

“We are not voting for the ANC,” angry Thembisa residents said on Sunday.

When ANC President Cyril Ramaphosa arrived at the Ekurhuleni community care centre in Thembisa, he was greeted by angry protesting residents, complaining about the candidate for their ward in the upcoming local government elections.

Community leader Khosi Mahlangu said: “We are protesting against the unfair processes happening in ward six, the Swaziland voting district, whereby it was not given an opportunity to choose a candidate for the upcoming local government elections. So the community is not going to vote.”

Ramaphosa is expected to visit the Winnie Madikizela-Mandela area as well as the Mpumelelo Primary School and Coptic Orthodox Church, canvassing for votes and mobilising people to vote on November 1

Mahlangu, who was one of the residents protesting outside the centre, said the community will ask Ramaphosa who they should vote for because they were not given an opportunity to choose a candidate.

ANC President Cyril Ramaphosa has assured Tembisa residents that their grievances will be addressed. "Please change the messages on your posters to read: Vote for the ANC." @TimesLIVE pic.twitter.com/eeY7gqcJ1g

She claims that a candidate was imposed on the community. “We launched disputes and we didn't get a report back. We want answers from Ramaphosa,” she said.

Another resident Gloria Mtshwene said when people get employed in the area, there is discrimination. “I won't vote, andizi. I'm voting for the president only, not the ward councillor because they've forgotten about us.”

Pinky Bulhali said the community is fed-up. “We don't have services in the area, they do not clean our area. Why did they decide to come today? It's because they know the president is here. Why now, where have they been?”

Bulhali says the ANC “treats us badly. What's happening here is not fair. They took three people to go inside and talk to Ramaphosa. How do we know that they will represent us truthfully. I didn't know my local councillor until today. It's not fair,” she said adding that this was the first time she had seen a large contingent of police in the area.

ANC leaders addressed the community and called for calm. “Let's allow the regional secretary to manage this thing and ensure that we are able to deal with all the issues that you are raising. Let's be orderly and not mess this up, if you don't co-operate then this is not going to solve this.”

An angry resident shouted: “We don't trust you any more. Why should we listen to you, we have been voting for the ANC since 1994.”

President Cyril Ramaphosa says the violent protests and looting that broke out in the country recently shook SA's belief in itself as a united nation.
News
9 months ago

President Cyril Ramaphosa on Thursday sang the praises of the late Johannesburg mayor  Jolidee Matongo, saying he was an outstanding leader who ...
News
9 months ago
Next Article