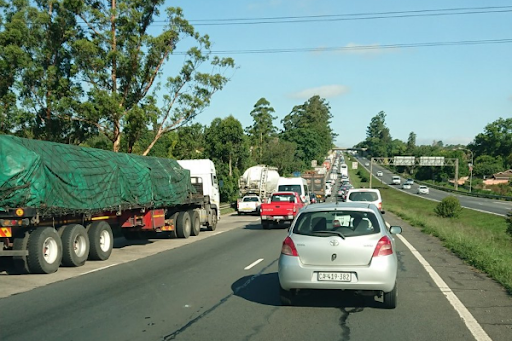 High traffic volumes are expected for the long weekend on the N3 between Gauteng and KZN
Image: @TrafficSA/Twitter

Gauteng’s traffic police urged motorists to be considerate and obey the rules of the road as major routes leading to the province were expected to be heavily congested at the end of the long weekend on Sunday.

The long weekend in Gauteng was characterised by accidents leading to a number of  fatalities.

Provincial traffic police said many of the accidents were related to road users not adhering to the rules and regulations of the road.

#BloodyLongWeekend
Already GP has recorded more than 17 Fatalities (Friday Heritage day 2021 to 7am Sunday morning)
Details of 3 multiple Fatality crashes early Sunday yet to be confirmed
PLEASE BE A RESPONSIBLE ROAD USER
Road Safety is everyone's RESPONSIBILITY to @_ArriveAlive pic.twitter.com/iqxUwW7X6v

“The Gauteng Traffic Police would like to issue a stern warning to all road users who continue to disregard the rules of the road that lawlessness will not be tolerated. The law enforcement authorities will be out in full force to ensure compliance with road safety,” said spokesperson Sello Maremane.

“We call upon road users to adhere to the prescribed speed limits and to ensure that their vehicles are in good condition before embarking on a road trip. The Gauteng Traffic Police also urge road users to be considerate towards one another as they travel to their various destinations. This will ensure that we save the lives during this long weekend.”

09h21 26/09 #N3TrafficVolumes: Traffic volumes picking up rapidly on the North #N3JoburgBound with over 900 vehicles going through #MooiPlaza. Please drive safely and share the road responsibly.

Pedestrians were urged to cross the road only when it was safe, and to make use of controlled intersections such as traffic lights and pedestrian crossings.

Strict law enforcement and zero tolerance for traffic offenders will be the order of the day on the N3 toll route between Gauteng and KwaZulu-Natal ...
News
10 months ago

14 minibus taxis have been impounded by the Limpopo transport and community safety department for various transgressions.
News
10 months ago
Next Article