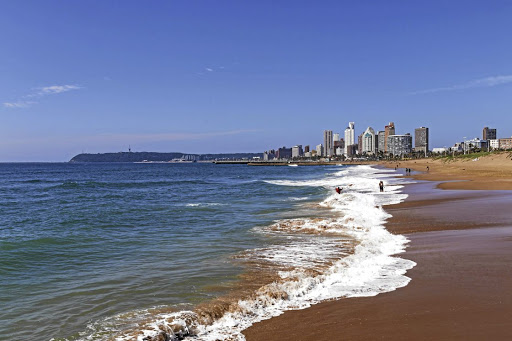 eThekwini announced on September 23 that Durban's central beaches were closed for bathing and any other sporting activity due to high E. coli levels in the water.
Image: 123RF/Leon Swart

“North, Bay of Plenty and Blue Lagoon beaches remain closed and teams continue to work tirelessly to have these, too, reopened soon. Beaches north of the Umgeni River that were affected by the UPL chemical spillage, are still closed,” he said.

The city announced on Thursday that central beaches were closed for bathing and any other sporting activity, with immediate effect.

It said the decision was in the interest of the safety of residents and tourists after signs of beyond normal E. coli levels in the water.

“The city moved with speed to conduct tests after seeing murky waters in some beaches and results showed a positive presence of these bacteria,” Mayisela said at the time.

“Teams are currently hard at work on a malfunctioning sewer pump station that is constantly vandalised for scrap metals and work is at an advanced stage to remedy the situation.”

Public warned of shark-infested waters along the Port Alfred coastline

The National Sea Rescue Institute (NSRI) has urged the public to be cautious along the Port Alfred shoreline.
News
3 months ago

Beaches north of the Umgeni River up to Salt Rock remain closed as a precautionary measure after the spill that occurred when a chemical warehouse in ...
News
5 months ago

About 1,600 chemicals were stored in a warehouse burnt during looting and KwaZulu-Natal faces considerable environmental damage in the aftermath.
News
6 months ago
Next Article