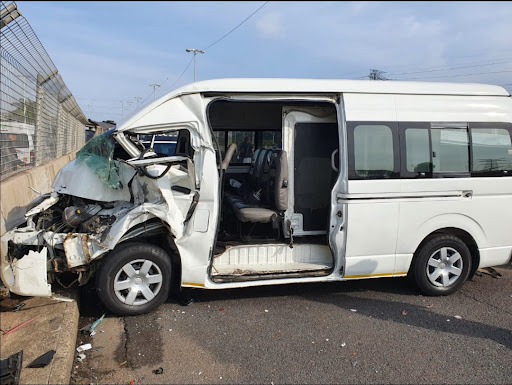 Several people were injured in a multi-vehicle collision in Durban
Image: Emer-G-Med

There was mayhem in central Durban on Friday morning when several people suffered injuries in a multi-vehicle collision.

“Paramedics were met with mayhem as a minibus taxi lay to its side occupying the width of the roadway.

“Four other vehicles had collided into one another and were strewn across the scene.

“Injured commuters were found clambering to safety and an on-scene triage area was established.

“On further inspection one person was found to be entrapped and the jaws-of-life were used to free him,” said Van Reenen.

“Once stabilised, the injured were taken by various ambulances to nearby medical facilities for further care.”

The cause of the collision was not known.

ANC Greater Johannesburg deputy secretary Loyiso Masuku says the City of Johannesburg is going through “a test of strength” after the death of newly ...
News
2 months ago

President Cyril Ramaphosa on Thursday sang the praises of the late Johannesburg mayor  Jolidee Matongo, saying he was an outstanding leader who ...
News
2 months ago
Next Article