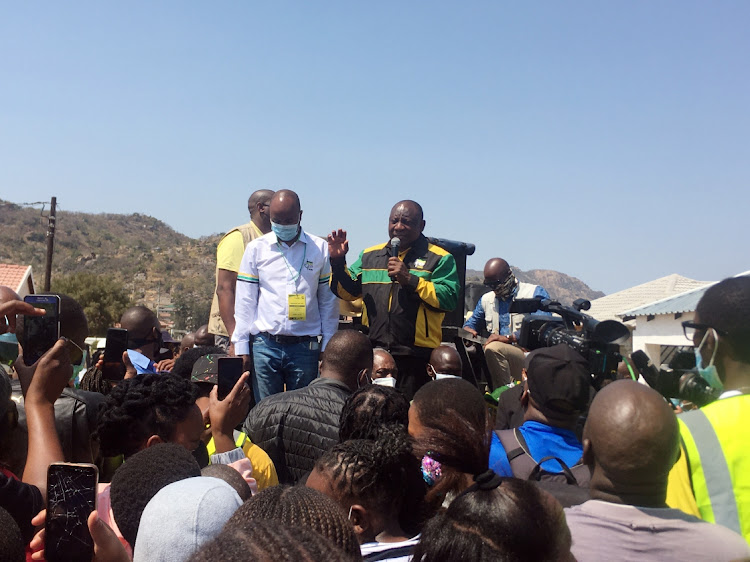 President Cyril Ramaphosa yesterday vowed that the governing party will get about 80% of the votes during the November 1 local government elections in Mpumalanga.

Speaking in Tekwane during his ANC campaign trail, Ramaphosa said the fact that the ANC is facing financial crisis will not hinder its work in government and the trust from the community.

Ramaphosa, who was accompanied by acting chairperson of the ANC in Mpumalanga, Mandla Ndlovu, premier Refilwe Mtshweni-Tsipane and other national executive committee members, said he had seen and heard about problems faced by the community, which incoming local government leaders should address.

“It was a very good day here in Mbombela. I interacted with young people. Some spoke about the traffic officers learnership that was stopped and the premier has promised to deal with that in a good way. I entered houses and saw how people are complaining about water, roads and other matters of service delivery,” Ramaphosa said.

“I also had a chance to go to the bridge which was washed away by heavy rains and the premier promised that the work to fix it will start on the 21st of this month. I’m really satisfied with what the councillors have done here, and also the fact that the ANC here is enjoying support. In the last election the ANC got 71% [of the vote] and I’m confident that we are going to remain victorious and get 80%.

“We believe our people hear our message. The challenges we have in relation to payment of salaries, that is going to be dealt with in the party and are not going to prevent us as a governing party from dealing with challenges in government. And that should be separate matters of the party and the government.”

Ramaphosa added that he found out that young people are complaining about lack of communication from local leaders, which frustrates them and not knowing what the government is doing.

“I get a sense that our people want more from their public representatives. They want to have a sense that the leaders are working for them. What they want is communication and to have confidence from government that government should be there to help its people. Look, just on the issue of R350 [the social relief of distress grant], one lady we interacted with said they are happy with the money from government,” he said.

Ramaphosa also called for political tolerance among political parties. He was reacting to the news that EFF leaders were prevented from campaigning in KwaZulu-Natal yesterday.

Paying tribute to late Johannesburg mayor Jolidee Matongo, Ramaphosa said: “I felt very sad when I was told of the sad news that the mayor of Johannesburg has passed away. It was a very sad moment for me to hear the news. I interacted with him on the day and also interviewed him before his appointment.”