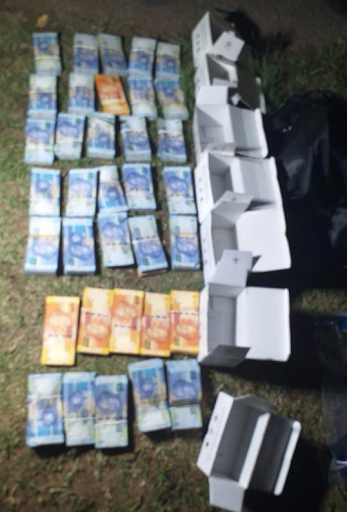 The ransom money paid to the alleged kidnappers of an Indian national.
Image: SAPS

Two suspects are expected to appear in the Durban magistrate’s court on Monday in connection with the kidnapping of an Indian national from a city parking lot.

A police team was told the men had demanded a ransom from the kidnapped man’s brother.

“The money was arranged and the meeting point was given to the victim’s brother on South Coast Road in Clairwood, south of the city.”

Mbele said the meeting point was subsequently changed to Mobeni.

“The team proceeded to the meeting point where the ransom was given to the suspect by the victim’s brother.”

Mbele said the suspects left the scene in a e-hailing taxi and the 24-year-old kidnap victim was dropped off.

“A chase of the suspects ensued and the vehicle was stopped by the team.”

Two people were arrested with the cash.

“The investigation continued to the suspect’s place of residence where a 9mm pistol, 15 rounds of ammunition and the suspect’s cellphones were found and seized.

“The tracing of other suspects is continuing.”

Mbele said the men, aged 34 and 39, have been charged with kidnapping and extortion.

Cap Xoli Mbele said he was one of three men who had hijacked a white VW Polo at Riverlea on October 30, 2018.
News
2 months ago

The woman was abducted from her home in Atteridgeville on Tuesday by at least two men impersonating police officers, said Col Athlenda Mathe..
News
2 months ago
Next Article