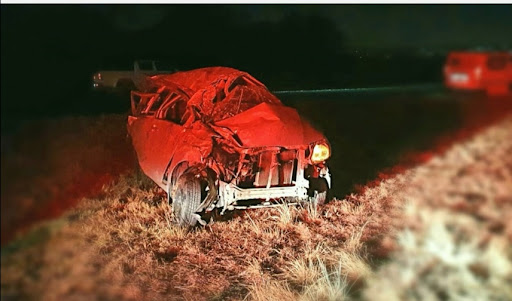 A woman died after being flung from a car into oncoming traffic on the N4, Pretoria.
Image: Emer-G-Med

A woman in her thirties died after she was ejected from a car and flung into oncoming traffic on the N4 highway, Pretoria, on Thursday night.

“Paramedics found that a single light motor vehicle had overturned several times before coming to a rest on the shoulder of the roadway.

“On closer inspection a female, believed to be about 30 years old, was found to have been ejected from the vehicle and flung into oncoming traffic.

“She was struck by another motor vehicle and was found to be deceased.”

Van Reenen said two other occupants of the vehicle suffered moderate injuries and were stabilised before being transported to hospital.

“The SA Police Services were in attendance and will be conducting the necessary investigations.”

According to preliminary information, two other vehicles were involved in the fatal accident, including a police vehicle.
News
4 months ago

Eight people were killed and 13 injured in a collision between a car and a mini-bus taxi on the N2 in northern KwaZulu-Natal on Sunday night.
News
4 months ago

A car tyre blowout has resulted in the death of a Gauteng man and left five others injured.
News
4 months ago

A Northern Cape high school has been plunged into mourning after three teachers were killed in a horror crash on Saturday night, while a fourth ...
News
4 months ago
Next Article