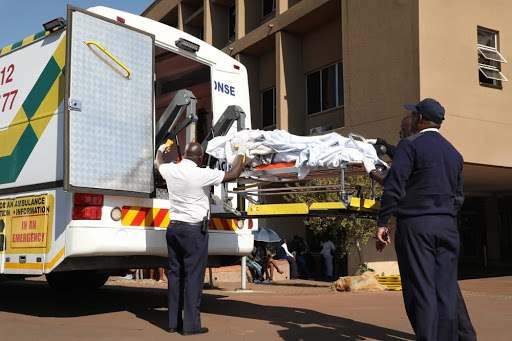 Patients at Bheki Mlangeni Hospital in Jabulani, Soweto, were transported to surrounding hospitals after a fire broke out on Monday.
Image: Thulani Mbele

The Gauteng department of health is converting a section of the Bheki Mlangeni District Hospital, in Soweto, into a dedicated 14-bed psychiatric ward in a bid to address the high demand for mental healthcare services.

“For 2021 the highest number of mental health patients presenting in a single month was in January, with 224 mental healthcare users,” she said.

“The accident and emergency unit is always overflowing with patients due to unavailability of beds due to high demand for mental healthcare.”

The Bheki Mlangeni District Hospital did not have a dedicated psychiatric ward due to its classification as a level one facility.

“The current hospital district mental healthcare services package allows for 72-hour observation, [after] which, depending on the level of care needed, patients are referred to either regional or tertiary hospitals.

“From the regional or tertiary hospital, patients are referred to specialised psychiatric hospitals, namely Sterkfontein, Weskoppies and Tara,” Kekana said.

Kekana said the hospital now has space for 26 mental health patients, which caters for 14 male and 12 female patients.

“We wish to emphasise that mental health patients are only placed in other wards when they need treatment for another condition, in addition to mental healthcare. Owing to their condition, some mental care patients tend to display aggressive behaviour towards staff and other patients,” she said.

“Security is always placed in sections with mental healthcare patients. The department is confident that in addition to security measures in place, this intervention [the new 14-bed ward] will help relieve pressure in other wards,” she said.

Former director of Gauteng mental health Dr Makgabo Manamela has accused Life Esidimeni of letting patients leave their facilities while they were in ...
News
4 months ago

Rat infestation, a malfunctioning kitchen, rising Covid-19 cases among staff and a shortage of PPE are some of the discoveries the public protector’s ...
News
6 months ago

Mental health conditions can be mistaken for ancestral calling

The calling to take on ancestral work and become a sangoma may present itself in a variety of ways.
Good Life
7 months ago
Next Article