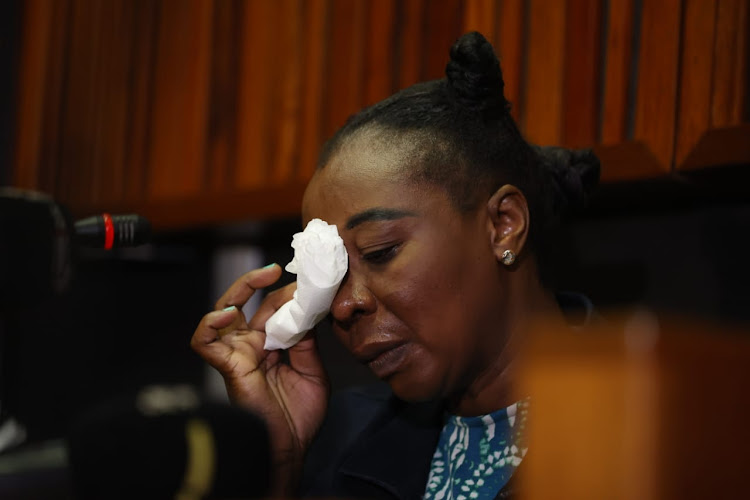 An emotional Nomia Rosemary Ndlovu could not hold back her tears while being questioned by her lawyer about her former boyfriend Maurice Mabasa, who she is also accused of killing.
Image: Thulani Mbele

Ndlovu’s emotional breakdown compelled judge Ramarumo Monama to briefly adjourn the matter for the accused to recollect herself in the high court in Johannesburg sitting in the Palm Ridge magistrate’s court.

Ndlovu, 43, took to the stand for the first time on Tuesday in a matter in which she is accused of murdering her sister, nieces, nephews and her boyfriend Maurice Mabasa.

When her lawyer led her through her testimony on Wednesday in connection with Mabasa’s murder, Ndlovu, who had appeared  calm throughout her testimony, cracked and cried.

The court heard the couple had been cohabiting  at the time of Mabasa’s murder and that they had been together for four years.

Nomia Rosemary Ndlovu, who is facing six charges of murder, and others including fraud and attempted murder, was apparently “very moneyed and ...
News
9 months ago

Ndlovu told the court that on October 14 2015, Mabasa, who worked as a security officer at the American Embassy in Pretoria, had failed to arrive at their home in the morning after working a night shift.

She said she tried to call him on two of his cellphones but both phones were off. “I grew worried and called his brother, Justice Mabasa, who said he had not heard from him but would try to get into contact with him,” said Ndlovu.

Ndlovu said she called Mabasa’s employer to find out whether he was at work but she was told that he had knocked off.

“I then went to Olifantsfontein police station where I wanted to report him missing. While in the trauma room, a police officer came to me and asked me what the problem was. The officer then told me that they discovered a body of a man in the morning in the precinct. The officer also said that they found cards on his person and identified him as Maurice Mabasa,” said Ndlovu.

Mabasa was found with more than 80 stab wounds and his body was found dumped in Olifantsfontein.

Earlier on, Ndlovu  testified about the deaths of her sister Audrey Ndlovu, who was found poisoned and strangled in her rented room in Thembisa. She also testified about the deaths of her cousin Witness Madala Homu, who was found dead with head injuries, and her niece, Zanele Motha, who died in June 2016 after claims that she was attacked on the streets of Kempton Park.

Ndlovu’s alleged killing spree came to an end in March 2018 when she was arrested for ordering the murders of her mother, Maria Mushwana, and sister, Joyce Ndlovu, and her five children.

The policewoman accused of murdering and plotting to kill relatives for life insurance claims as a "generous" gambler who often bought her colleagues ...
News
9 months ago

A former police constable put on a spectacle for the media contingent ahead of her court appearance on Tuesday, placing her hands on her hips, ...
News
9 months ago
Next Article