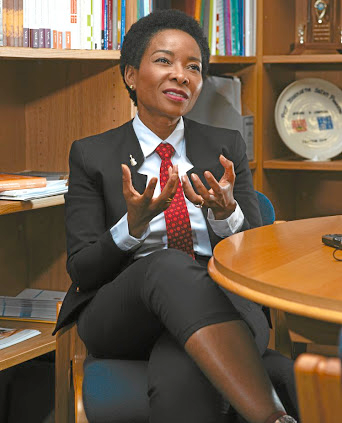 UCT vice chancellor Pro Mamokgethi Phakeng has promised to have more engagements with the LGBTQIA+ community, after the university’s controversial seminar on science and intersex people.
Image: HETTY ZANTMAN

University of Cape Town vice-chancellor Prof Mamokgethi Phakeng has unreservedly apologised to the LGBTQIA+ community, after harsh criticism of the university’s seminar on science and intersex people.

In a statement on Friday, Phakeng said: “I apologise without reserve for the hurt and distress these events caused, not only to the LGBTQIA+ community, but to everyone that is concerned about our shared quest for dignity and humanity for all.

“To further that quest amid that hurt and distress and anger, I have decided to have engagements with the LGBTQIA+ community over the next two months. It is in that spirit of humility that I offer my apology, and in that spirit that we must embark on the way forward,” she said.

Phakeng came under fire this week after UCT hosted an open lecture titled “What does science say about LGBTQI+”.

UCT vice-chancellor Prof Mamokgethi Phakeng on Tuesday urged everyone to do their part to counter sexual and gender-based violence, as the university ...
News
4 weeks ago

UCT named top varsity in Africa by a global ranking

The University of Cape Town (UCT) has been ranked the highest on the continent in the Academic Ranking of World Universities (ARWU) 2021.
News
1 month ago

“When a baby is born, we look at the external genitals of the baby and should be able to say whether it’s a boy or a girl. If a trained medical health professional can’t make that call, then we call that intersex and then it opens up a whole door.”

The Gender Diversity Coalition expressed distress over UCT’s decision to have the seminar, and called on the university to act swiftly. It said the seminar was hurtful to the transgender and intersex community, who are vilified daily by some medics.

The coalition said the lecture not only provided misinformation on children born intersex, but has caused further harm to these individuals and their families “who feel the daily violence of medical and pathologised diagnosis that have no positive outcome on their lives”.

The coalition criticised Dr Mathabe, charging she provided misinformation regarding children born intersex. At the seminar, Mathabe reportedly said: “Intersex is a condition that is potentially life-threatening.”

“I appreciate her humility, integrity and courage in reflecting on this matter and her recognition that there was harm caused. I have no doubt that the vice-chancellor will use this moment of learning to come back even stronger in her continued quest to work towards inclusivity and diversity for all.”