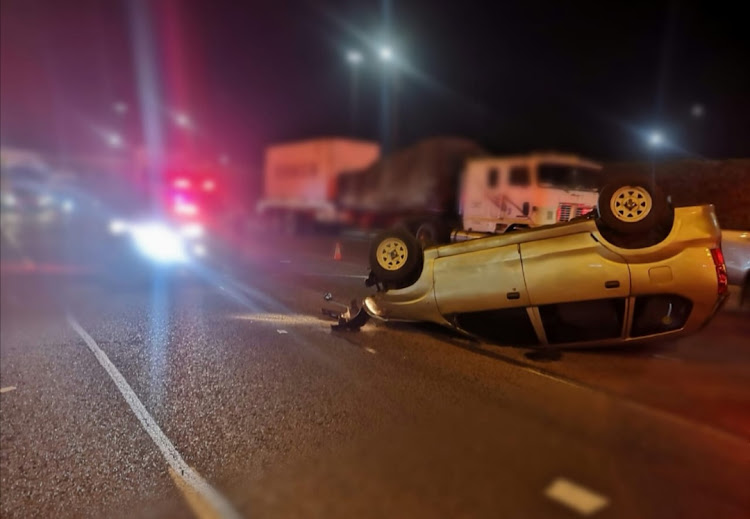 One man was killed and five others injured after the car they were travelling in had a tyre blowout in Benoni on Wednesday night
Image: Emer-G_med

A car tyre blowout has resulted in the death of a Gauteng man and left five others injured.

“On arrival on scene paramedics found a single light motor vehicle had overturned after suffering a blowout.

“Six male occupants of the vehicle aged between 20 and 30 years of age, were assessed on the scene.

“One man was found to have suffered fatal injuries and was declared deceased on arrival of paramedics.”

Van Reenen said paramedics had to administer advanced life support to another occupant of the car who was in a critical condition, before rushing him to hospital.

“Four other men were treated and transported to hospital for moderate injuries.

“The local authorities were in attendance and will be conducting the necessary investigations accordingly.”

A Northern Cape high school has been plunged into mourning after three teachers were killed in a horror crash on Saturday night, while a fourth ...
News
1 month ago

One person has died and two people are fighting for their lives after their vehicles crashed head-on on Gauteng's N12 highway on Sunday night.
News
1 month ago

A horrific taxi crash into a tree in Krugersdorp left six people dead and five - including a child - seriously injured on Saturday night.
News
1 month ago

The driver of a bus carrying more than 70 church congregants lost control and the vehicle rolled down an embankment in Underberg, KwaZulu-Natal on ...
News
1 month ago
Next Article