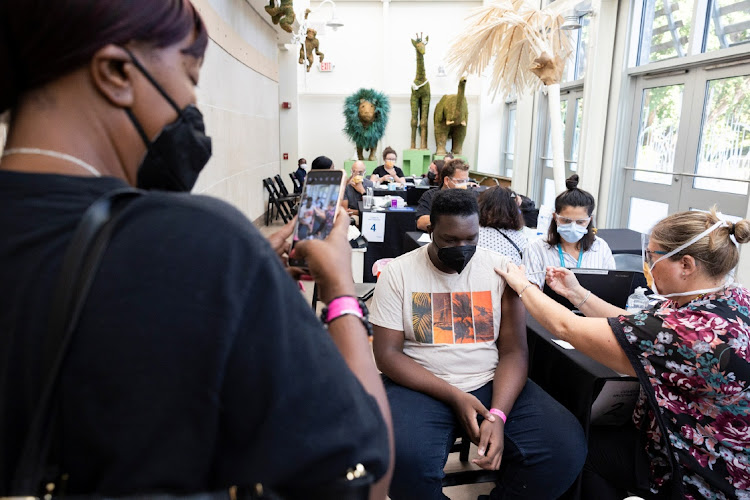 A mom takes a photo of her son getting his second dose of the Covid-19 vaccine at the Philadelphia Zoo in Philadelphia, Pennsylvania, on September 7 2021.
Image: REUTERS/Rachel Wisniewski

SA is on its way towards the end of the third wave of Covid-19 infections, but that doesn't mean there is room for complacency.

That was the message from the National Institute for Communicable Diseases (NICD) on Wednesday as it released the country's latest coronavirus statistics.

“Gauteng and Limpopo have already met the end-of-wave threshold criteria,” he said.

The number of hospitalisations and deaths have also decreased compared to last week, the NICD said.

But Dr Michelle Groome, head of the public health surveillance and response division at the NICD, said that now was “not the time for complacency” despite the good news. Mask-wearing, hand hygiene and social distancing were still vital, she said.

In terms of the new cases, KwaZulu-Natal remained the country's virus epicentre with 1,923 confirmed cases in the past day. The Western Cape recorded 1,591 cases and the Eastern Cape 1,251.

The NICD added that there had been an increase of 360 hospital admissions in the past 24 hours, taking the number of people now admitted for treatment to 11,208.

According to SA's latest vaccine statistics, there were 217,613 jabs administered in the past day, up to 5pm on Wednesday. This means that more than 14-million doses have been administered in total - and with just fewer than 6.9-million people fully vaccinated with their the one-dose J&J or second of the two-dose Pfizer vaccine.

“We all have a part to play by getting vaccinated and encouraging our family, friends and colleagues to do the same,” said Groome.

KZN premier Sihle Zikalala had ordered that Simelane say sorry after TimesLIVE published a video and photos of the MEC partying up a storm with ...
News
8 months ago

The Western Cape lockdown must be eased as the third wave of Covid-19 declines, says premier Alan Winde.
News
8 months ago
Next Article