Khomanani's body was found ln a stream of water 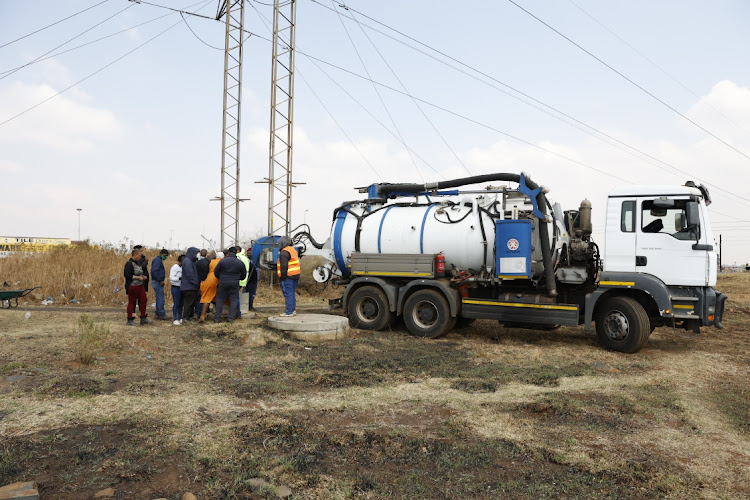 The family of Khomanani Mawa,6, who fell into an open manhole on Sunday before his body was found on Wednesday, has put the blame on municipal workers for leaving the sewerage structure open for more than five months.

Khomanani's body was found by municipal workers lying in a stream of water with one leg exposed after the body was pushed by water pressure from a nearby manhole near Hamilton Street in Everton. Emfuleni municipality spokesperson Lebo Mofokeng said Khomanani's body was discovered after the workers broke several manholes with a TLB while they followed the underground sewer channel which led them to the stream.

Khomanani was playing with his cousins in an open field about 100m from their Orange Farm, Johannesburg south, home when he accidentally fell into the meter-high manhole around 5pm. The search to find him only started 24 hours later. Before the discovery of his, the workers from Johannesburg Water were seen using pipes in an attempt to locate him.

Khomanani’s uncle Kenneth Mbatha said he was pleased that Khomanani's body had been discovered after three tormenting days for the family.

He, however, placed the blame on municipal workers who, he said, had a tendency of leaving the manholes wide open after working on them. Sowetan counted about nine manholes scattered along the 1km stretch of muddy field near Khomanani’s home and at least two of them did not have lids, including the one in which Khomanani fell.

The open space also has a field used by boys to play soccer.

“We’ve lived here for many years and I’ve never seen all these manholes covered. They don’t even put up signs next to them to warn the public. The last time I saw a council truck there was about five months and they left it open. People here have become used to the lack of service delivery and seeing these manholes unsealed. We don’t even bother to report them anymore,” said Mbatha.

Babalwa Ntola, a resident near the area where the manholes are located, said the open field was very popular with the children as they did not have proper grounds to play on.

“Orange Farm is a neglected area where basic services such as proper roads, consistent water and electricity supply hardly exists. I used to report these uncovered [manholes] to previous ward councilors many years ago but I eventually stopped because they did nothing about them. Now kids come here to play because there is no other place available to them,” said Ntola.

However, ward councilor Makhosazana Ndlela blamed the uncovered manholes on vandals in the area.

“As far as I know those manholes are always closed but sometimes criminals remove them. On Tuesday there was a lid where the boy fell and I heard this morning (yesterday) that it has been removed. I’m not sure what is happening but we will investigate it,” said Ndlela.

Khomanani’s family said they did not want government to bury their son but rather to take responsibility.

“They always tell bereaved families who have lost children because of their negligence that they will take care of the funeral costs. We are pretty much capable of burying him. We just want the government to accept responsibility and close all these manholes so that we don’t see another family going through what we are going through,” said Mbatha.

He dismissed any foul play in Khomanani’s fall, saying it was impossible that his cousins (also six-years-olds) were capable of doing that.

“These are cousins and they are little kids. We can’t blame them for what happened,” said Mbatha.

Three school children who were found floating in Mohlaletse River in Limpopo on Tuesday had been bunking school before they died.
News
4 months ago

Gatvol residents make do with life in a stinking hellhole