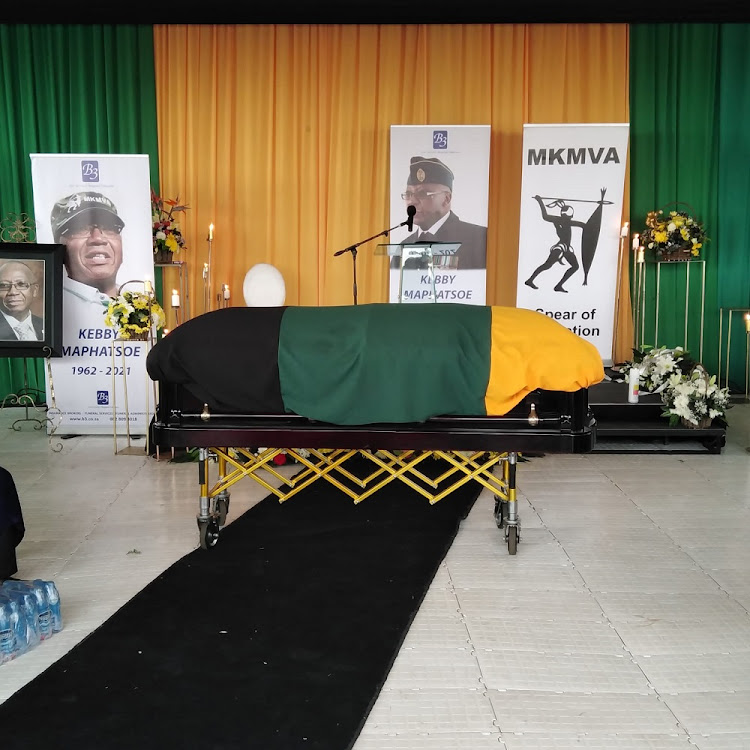 The president of the now disbanded uMkhonto weSizwe Military Veterans Association (MKMVA) Kebby Maphatsoe was a soft man who died angry due to the lies spewed about him, his brother said during his funeral in Johannesburg on Sunday.

Lehlokoa Maphatsoe slammed reports that his brother died in hospital, saying he in fact passed away in his sleep at home. Attempts to resuscitate him were unsuccessful and  paramedics declared him dead with heart failure identified as the cause of death.

“Kebby died being an angry man, his softness gave him a heart attack. I remember when there were these rumours that Kebby ran away from the [ANC] camps - enemy agent. I ended up fighting with him and said, 'My brother, enough is enough, you must now talk.'

“But, because he loved his organisation, he said, 'No, if I can say what happened, I’ll be breaking my organisation the ANC,'” Lehlokoa told mourners.

Maphatsoe served as deputy minister of defence from 2014 to 2019 and was a staunch supporter of former president Jacob Zuma.

Maphatsoe called on Zuma not to hand himself over to the police in June after the Constitutional Court judgment that sentenced the former president to 15 months in prison.

“This man has run his race and has accomplished his mission, though he died being an angry man,” said his brother.

The ANC parliamentary caucus says it has learnt with shock and sadness of the death of former Umkhonto we Sizwe Military Veterans Association ...
News
3 months ago

Days before his death Maphatsoe had called his family and made his last wishes known, including the list of fellow comrades he wanted to speak at his funeral.

He asked to be recorded, because some people would not believe him, his brother said.

Zuma, Supra Mahumapelo, Gwede Mantashe, Ayanda Dlodlo and Nathi Mthethwa were the speakers he specifically asked to be given time to speak about him. He asked that they “not be pressured, but given time”.

They were all in attendance on Sunday except Zuma who sent a tribute.

During the apartheid years he went into exile and became a trained political commissar of uMkhonto weSizwe (MK), the armed wing of the ANC. He received further training in Angola and the Soviet Union and was also exiled in Uganda before returning to SA.

Under his political direction, the MKMVA became an integral component of the ANC and for the first time, the association was in the central agenda of the ANC political framework, “with the achievement of progressive resolutions for the association and the ANC”, according to a statement by the ANC.

Newly elected Johannesburg mayor Jolidee Matongo shared a moving tribute to Maphatsoe and applauded his contribution to MKMVA. He announced that the city had allocated R90m for programmes dedicated to military veterans.