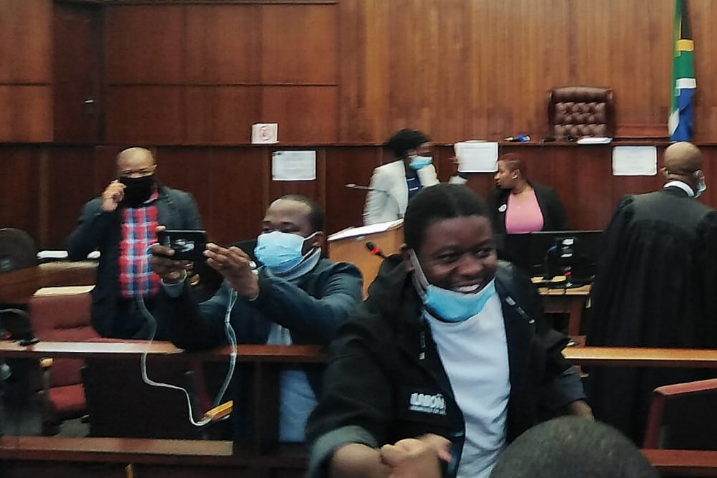 Fees Must Fall activist Bonginkosi Khanyile laughs and greets friends and family in the Durban magistrate's court on Tuesday, where the state painted him as a deadbeat dad.
Image: Mluleki Mdletshe

Durban state prosecutor Yuri Gangai painted a picture of Fees Must Fall activist Bonginkosi Khanyile as a deadbeat dad after disclosing that he had spent about R12,000 at a clothing store and R10,000 on food and drinks while he pays R250 a month towards the maintenance of his four children.

That’s what emerged in the Durban magistrate’s court on Tuesday during a bail application for staunch Jacob Zuma supporter Khanyile, who is charged with inciting public violence, holding an illegal gathering and not wearing a face mask in public during unrest in Durban in July.

Earlier, Khanyile’s lawyer Masibonge Mathomane asked the court to release Khanyile on R500 bail as his children were financially dependent on him. However, Gangai disputed this.

Khanyile’s family and friends — including alleged looting instigator Ngizwe Mchunu — packed courtroom 12 to show support for the activist, who looked unperturbed as he made a third appearance for his formal bail application.

“Education”, as he is affectionately known, is linked with the violence and unrest which resulted in the deaths of more than 300 people in KZN and Gauteng.

The 31-year-old was taken into custody on August 20 at his Wits University student residence by the Hawks. He has been held at the Durban Central police station while awaiting the outcome of his bail bid.

The court heard about Khanyile's financial records, and that apart from his studies he works at the department of co-operative governance and traditional affairs (Cogta) as an intern.

Mathomane tried to downplay the low maintenance paid to the children by saying that money was not the only way he supported them. He said his client took his children out to restaurants and shopping during that period, adding that parenting was not only about money but also love.

However, after much deliberation, which included evidence from KZN's acting provincial commander for the Hawks' crimes against the state unit, Anton Booysen, who testified about Khanyile’s spending habits, magistrate Vincent Hlatshwayo adjourned the bail  application to Tuesday.

Mathomane asked that his client continue to be kept at the Durban Central police station for his safety.

At his previous appearance, the state submitted five videos to support their argument against bail.

In one of the videos played in court, Khanyile is allegedly seen addressing a group of people at the Warwick Avenue taxi rank. He is heard encouraging the group that “those who are burning tyres and blocking the roads must continue to do so until Zuma is released”.

Khanyile has had previous brushes with the law, having been sentenced to three years of house arrest in 2019.

His mother, Phumzile Makhathini, told SowetanLIVE's sister publication TimesLIVE she wants her son released so he can continue with his studies.

“It is a very painful situation because we want him to complete his education. Nothing can make me happy while my son is arrested. What hurts the most is that they are still only talking about bail for now — which should not even be a problem because he did not kill anyone. He wasn't even a part of burning down shops,” she said. 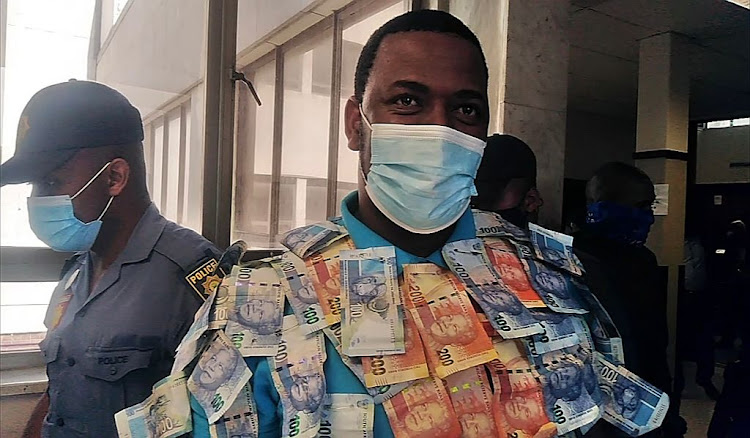 Among those in attendance was musician and herbalist Dr Andile Dlamini who caused a stir in court.

Dlamini, better known as Mzimb'okhalimali (a body dripping with money), said he is behind Khanyile, for standing up for his beliefs.

“What brought us here today is to show support to Bonginkosi. He is a man that we know well because he has lived among us,” he said.

Dlamini explained his unique style of covering his clothes with bank notes.

“Wherever I go, I dress up like this. It is my brand and my own different style. I am a traditional healer — once I help somebody, they will thank me by paying cash which I will wear like this. It is a way of saying thank you to my ancestors.”

'Ngizwe Mchunu being used as a scapegoat for riots'

There are claims of Ngizwe Mchunu being used as a scapegoat in an effort to hold someone responsible for the recent widespread riots that engulfed ...
News
1 year ago

Less than 24 hours after turning to social media to ask for donations to pay for his studies, #FeesMustFall activist Bonginkosi Khanyile said he is ...
News
1 year ago
Next Article