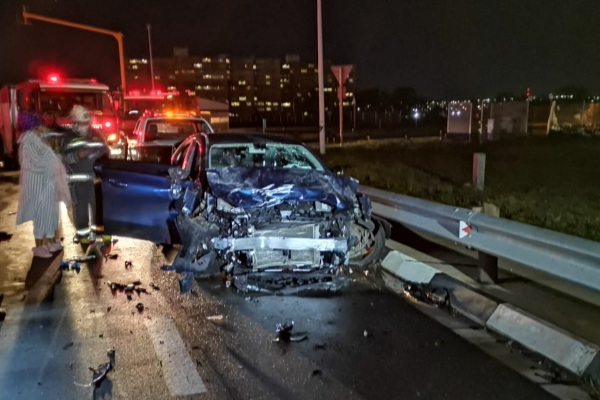 The scene where Nonzwakazi Maho, 44, and a man who is yet to be identified died in a car accident with Nelson Mandela Bay mayor Nqaba Bhanga.
Image: PORT ELIZABETH TRAFFIC UPDATES

One of the occupants of the Audi that collided with Nelson Mandela Bay mayor Nqaba Bhanga’s Mercedes-Benz on Saturday night has been identified.

Nonzwakazi Maho, 44, and a man who is yet to be identified, died at the scene on Saturday night, HeraldLIVE reported.

The police released the deceased woman’s name on Monday morning, but said the man’s identity would be released only once his next-of-kin had been notified.

Meanwhile, Bhanga is said to be in a stable condition and recovering after undergoing surgery on Sunday night to stop internal bleeding as a result of the accident.

According to mayoral spokesperson Leander Kruger, Bhanga is in the high care unit of Netcare Greenacres Hospital. Kruger said the mayor’s injuries were more severe than initially reported, but doctors had indicated he was in a stable condition.

A case of culpable homicide is under investigation and the police have urged anyone with information about the incident to contact Detective Warrant Officer Errol Kleynhans on 082-302-6419 or their nearest police station.

Mayor in hospital after two die in car crash

The DA has sent condolences to the family of its Eastern Cape leader Nelson Mandela Bay mayor Nqaba Bhanga, who is recovering in hospital after ...
News
4 months ago
Next Article