'I wanted to make a difference': SA woman comes top of her class at US Navy boot camp

Zenka Yodice from Amanzimtoti, KwaZulu-Natal, serves with the US Navy's Patrol Squadron Five, a hi-tech maritime patrol and reconnaissance squadron tasked with monitoring the world’s oceans. 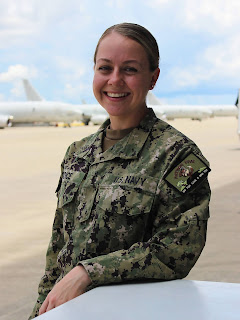 Zenka Yodice from Amanzimtoti, KwaZulu- Natal, is flying the flag high with her service to the US navy’s maritime patrol and reconnaissance aircraft squadron in Jacksonville, Florida.

Yodice serves with Patrol Squadron Five, a hi-tech maritime patrol and reconnaissance squadron tasked with monitoring the world’s oceans in the state-of-the-art P-8A “Poseidon”, according to the navy's outreach programme.

“I wanted to make a difference and do something bigger than what my life at the time offered. I learnt about resiliency and being able to adapt quickly, knowing that life can be much more difficult than its current circumstances.

“I also learnt that kindness goes a long way. The navy protects people by deploying around the world,” said Yodice.

With more than 90% of all trade travelling by sea, and 95% of the world’s international phone and internet traffic carried through fibre optic cables lying on the ocean floor, navy officials emphasised that the prosperity and security of the US was directly linked to a strong and ready navy, says the Navy Outreach website.

South Africa may lose its state-owned defence industrial base and the ability to repair, maintain and overhaul most of its defence systems if the ...
News
1 year ago

Yodice joined the navy a year ago, and serves as a personnel specialist. Growing up in Amanzimtoti, Yodice attended Kuswag High School and graduated in 2006. She said she finds the values in Amanzimtoti similar to those needed to succeed in the military.

According to the chief of naval operations, Admiral Mike Gilday, four priorities will focus efforts on sailors, readiness, capabilities and capacity.

“For 245 years, in both calm and rough waters, our navy has stood the watch to protect the homeland, preserve freedom of the seas, and defend our way of life.

“The decisions and investments we make this decade will set the maritime balance of power for the rest of this century. We can accept nothing less than success.”

There are many accomplishments that come with military service, and Yodice is most proud of being named the honour graduate at boot camp.

“Being the top of my class made me proud because it confirmed that I can overcome anything. Being able to do something and be part of something that many people where I'm from dream about has been rewarding,” added Yodice.

Indonesian President Joko Widodo on Monday expressed condolences to the families of the 53 crew members aboard the Nanggala-402 submarine that was ...
News
1 year ago

Rescuers find debris thought to be from missing Indonesian submarine

Search teams have recovered debris believed to be from an Indonesian submarine missing for days in the Bali Sea, defence officials said on Saturday, ...
News
1 year ago
Next Article