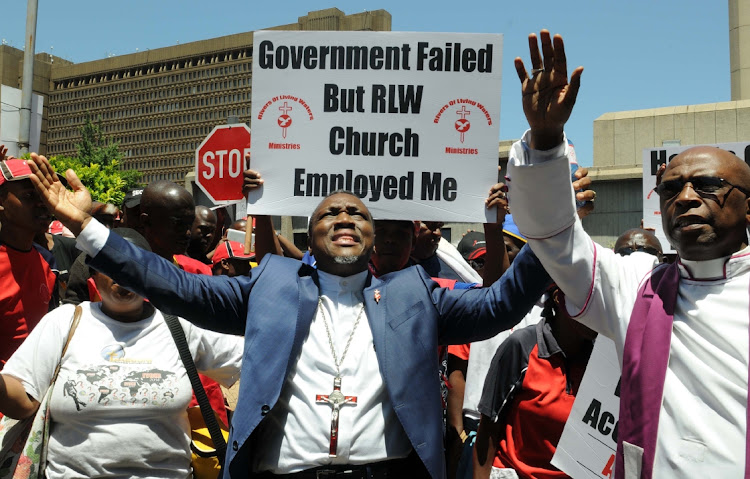 Bishop Zondo is seen here leading a march outside of the CRL Rights Commission in Johannesburg.
Image: PETER MOGAKI

The well-known bishop is alleged to have raped and indecently assaulted nine women, luring some of them under the pretext of praying for them. His trial  in the high court in Pretoria began on Monday.

An indictment prepared by the NPA alleges that Zondo, 55, raped and indecently assaulted eight women and a minor, with some of the incidents happening at his church premises.

Some of the  victims are said to be  Zondo's relatives whose family members tried to address one of the incidents through a meeting, according to the indictment.

The indictment alleged that some of the victims were members of the church  lured to Zondo under the guise that the bishop wanted to pray for them.

“The complainant in count 7 bypassed the church to drop off a congregant. The accused [Zondo] was present at the church. The complainant went to greet the accused whereupon he took her to his office and had sexual intercourse with her without her consent,” the indictment said.

The  rape incidents are alleged to have taken place between 2015 and 2018 while an indecent assault charge involving a then child who was eight or nine years old is said  to have been committed in 1980.

In another incident, Zondo is alleged to have offered to pay R25,000 “to cleanse the complainant” who had laid a charge of rape against the bishop when a family meeting was held to discuss the matter.

A senior pastor from the Rivers of Living Waters Ministries has defended the church's leader, Archbishop Stephen Zondo, who has been accused of rape ...
News
10 months ago

“During the meeting, the accused [Zondo] admitted to the allegations against him and offered to cleanse the complainant by paying R25,000 on condition that she withdraws the charge against the accused. The complainant declined the offer,” the indictment said.

Seven of the adult victims  were allegedly raped in Evaton, at a Formula 1 hotel in Johannesburg and in the Rivers of Living Waters Ministries branch in Robertsham.

The trial which was transferred from the Sebokeng magistrate’s court is set to run until the middle of next month.

Zondo had previously told his supporters  he was ready for the trial which would unveil the truth about the allegations he is facing.

In December, judge Leonie Windell  rejected Zondo and pastor Lydia Malete's urgent interdict to stop the Commission for the Promotion and Protection of the Rights of Cultural, Religious and Linguistic Communities Commission's investigative hearings into alleged sexual abuse, philandering and financial misconduct at Zondo's Rivers of Living Waters Ministries.

Malete, a senior pastor in the church, was invited by the commission to give her testimony and failed to obtain an urgent interdict to stop the hearings in response.