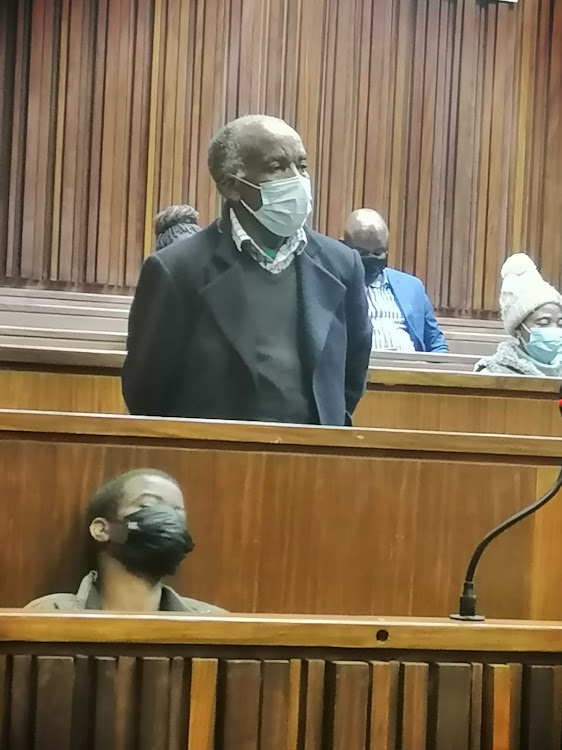 Thlomedi Ephraim Mfalapitsa, 67, in court on Friday in connection with the murder of three Cosas supporters in 1982.
Image: NPA

Thlomedi Ephraim Mfalapitsa, 67, a former Vlakplaas policeman, appeared in the high court in Johannesburg on Friday in connection with the deaths of three student activists in Krugersdorp nearly 40 years ago.

The case of Mfalapitsa, who was a SA Police Security Branch officer, was postponed until Monday as the judge presiding over the matter was off due to ill-health.

Mfalapitsa's case stems from the killing of three Congress of SA Students (Cosas) supporters, Eustice “Bimbo” Madikela, Ntshingo Mataboge and Fanyana Nhlapo, and the attempted killing of Zandisile Musi, who survived an explosion inside a pump house at Krugersdorp on February 15, 1982.

In its indictment, the state said Mfalapitsa was an askari, a term used to describe former members of the liberation movements, particularly the ANC, who joined the Security Branch and were working against their former comrades.

The state said before Mfalapitsa defected to the security branch, he had a close relationship with two elder brothers of Musi, who served with him in Umkhonto we Sizwe (MK), the armed wing of the ANC, in exile.

The ANC government which paroled apartheid state assassin Eugene de Kock spent R200,000 a month in taxpayers' money for his upkeep, the Zondo ...
News
1 year ago

After he had defected, the accused established contact with Musi, who was a member of Cosas.

Musi and the three deceased wanted to leave the country to join the ANC in exile with a group of other comrades.

Musi explored the possibility of leaving the country with the accused, whom he erroneously still regarded as a member of MK, unaware that the accused had become an askari.

Mfalapitsa was stationed at Vlakplaas, a secret security police base at the time.

The accused was allegedly ordered by Jan Carel Coetzee, a commander at Vlakplaas, to lure Musi and the deceased to an explosive-infested pump house at a mine near Krugersdorp, under the guise of giving them military training.

They then would be killed in an explosion under circumstances which would create the false impression that they blew themselves up while undergoing military training.

The state alleges that the order to kill the students emanated from senior officers within the security branch and was conveyed to Coetzee by his superior, Willem Frederick Schoon.

The arrangement was that once the students were inside the pump house, the accused would leave under the pretext of fetching more training equipment or hand grenades from the taxi.

The explosives would then be detonated once he was a reasonable distance away from the pump house.

The explosives detonated, killing the deceased instantly. Musi survived the explosion but was severely injured and hospitalised.

When he was discharged from hospital, he was charged with being in possession of the explosives that killed his comrades. The charges were eventually withdrawn against him.

EFF's Mbuyiseni Ndlozi alleges that FW de Klerk had blood on his hands and was not a peacemaker.
News
2 years ago

Vrye Weekblad is back and armed with a power crew

Tiso Blackstar Group has confirmed the return of Vrye Weekblad - the historic anti-apartheid Afrikaans newspaper which shut down 25 years ago after ...
News
3 years ago

Former apartheid era police killer Eugene de Kock was reportedly held against his will for more than two hours at Pretoria’s Kgosi Mampuru II Prison ...
News
5 years ago
Next Article