Man shot and dragged out of Mercedes-Benz in Erasmia dies 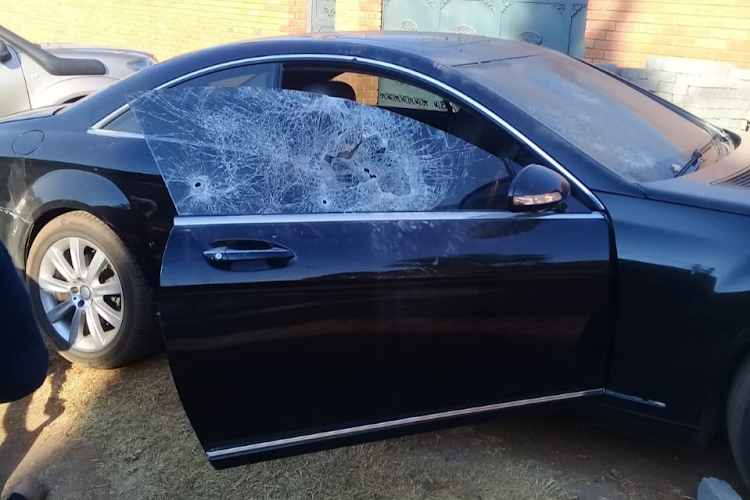 The Mercedes-Benz CL500 was riddled with bullets in Erasmia, Centurion.
Image: Supplied

Khaleel Gani, known as Golpie, who was shot last week while driving a black Mercedes-Benz in Erasmia, Tshwane, has died.

Abram Appel from Cops Tactical Reaction Services in Laudium told TimesLIVE after the incident that at least seven shots were fired at the Mercedes CL500 before it crashed into an electricity box on Barbara Coetzer Street.

Appel saw three men, who were travelling in a white BMW 1 Series, kicking the driver’s side window of the Mercedes while one of them shouted that his wife was in the vehicle.

Gani was dragged by the men from the Mercedes, and minutes later a woman got out of the Mercedes and departed with the three men.

Police spokesperson Capt Mavela Masondo said after the shooting, a vehicle matching the description of the suspects’ BMW was spotted in the Johannesburg CBD.

One suspect was arrested and a firearm was recovered, said Masondo.

Aboo was initially charged with attempted murder, possession of an unlicensed firearm and unlicensed ammunition.

Masondo said Aboo would now be charged with murder.

Video: Shooting Erasmia Pretoria. The gunman was arrested in JHB. The victim is in a critical condition. pic.twitter.com/E971QEG4QZ

Aboo is out on bail of R1,000 and is expected back in court on September 6.

Gani is scheduled to be buried on Friday afternoon.

Crime stats: 5,760 murders with most killed in public places and homes

Body of woman found in bushes with hands tied, half naked and burnt

The body of a woman was found partially burnt and half naked in bushes outside Polokwane in Limpopo, police said on Friday.
News
9 months ago
Next Article