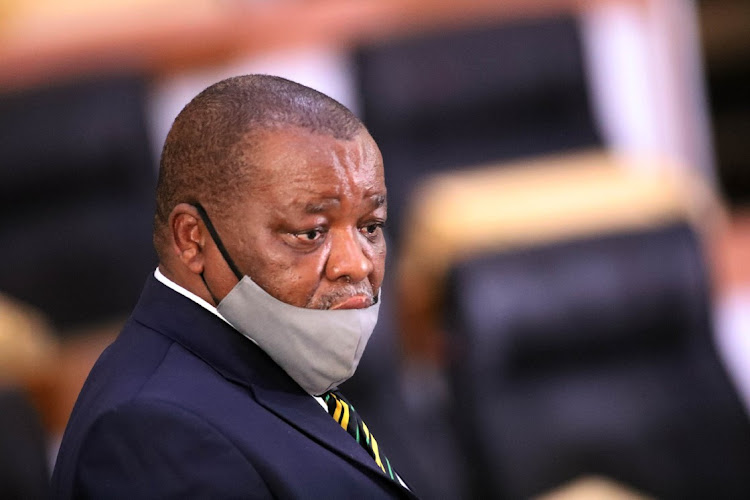 Minister Gwede Mantashe welcomed the inclusion of the government in this year's commemoration event for the Marikana massacre. File photo.
Image: Veli Nhlapo

Until now, the government has not participated in Marikana commemoration events, mineral resources minister Gwede Mantashe said on Tuesday.

He was speaking at a memorial lecture and annual commemoration of the tragedy hosted by Sibanye-Stillwater, which now owns the Marikana mine where 44 people, mostly mineworkers, lost their lives during wage-related unrest in August 2012.

At the time of the unrest, the mine was owned by Lonmin.

Mantashe was invited this year as one of the speakers alongside Mamphele Ramphele, Archbishop Thabo Makgoba and Sibanye-Stillwater management.

“It is worthy of noting and regrettable that government officially participates in the commemoration of this tragic event for the first time after nine years. We are, however, humbled by this gesture,” Mantashe said in a virtual address.

“To us, this commemorative occasion is a double-edged sword. First, it reminds us of an unfortunate and regrettable event in our past which must never repeat itself. Second, it implores us to strive for the higher ideals amplified by the text and spirit of our transformative constitution.”

He said the massacre at Marikana had brought change to the mining industry with a new emphasis on the social responsibility of those who mined in communities and ensuring they brought about meaningful contribution to those communities.

“It is in this context that the changes in the governance of natural resources have expanded the range of stakeholders in the management of natural resources. The result of these shifts has been the establishment of social partnerships between the state, the private sector and civil society,” Mantashe said.

“It is common to see the embodiment of the elements of social license being part of the law, thus amplifying the voice of the affected communities in mineral governance.

“In addressing the misfortunes of our past mineral governance, wherein the involvement of communities and workers was not well articulated, the 2018 Mining Charter recognises this truism by ensuring the communities and workers do not only participate in the exploitation of mineral resources as purveyors of cheap labour, but also as equity owners.

It is only in the context of harmonious coexistence between the communities, workers and mining companies that mineral resources can be optimally and orderly exploited.

“The charter has further ensured this benefit is not subjected to any reduction by the mining right holder through the issuing of new shares. The 5% equivalent of issued shares capital for the benefit of host communities shall be administered at no cost by a trust or similar vehicle.

“What is important to note here is that the trust must comprise of representation of host community members, including community-based organisations and the traditional leadership.”

He said the department of mineral resources had identified compliance monitoring as one of the priority areas that need to be strengthened.

“It is only in the context of harmonious coexistence between the communities, workers and mining companies that mineral resources can be optimally and orderly exploited.”

The new charter called for consultation and inclusion by the miners from mining communities, traditional authorities and relevant municipalities. It also made provision for collaboration of mining right holders operating in the same area to identify projects and maximise socioeconomic developmental impact in line with approved social and labour plans.

“The charter further requires 100% implementation of the social and labour plan (SLP) projects within any given financial year. This will result in impactful projects that will make a difference in communities,” Mantashe said

“However, these SLPs should not replace the municipal integrated development programmes (IDP) but must compliment them.

“Furthermore, the introduction of the district development model (DDM) will enhance collaboration among the stakeholders and across sectors to effectively address the socio-economic challenges faced by communities.”

Mantashe said the implementation of the charter has seen mining companies building and refurbishing community healthcare centres, schools and roads.

“We recently visited Mpumalanga, for instance, to officially open two state-of-the-art healthcare facilities in Middelburg and Cathyville, which were built by mines and handed over to the communities. We expect all mining companies, including Sibanye-Stillwater, to follow suit.”

Sibanye-Stillwater continues to take care of the families of the 44 people who died the in wage-related unrest and has built houses for many of the widows and put their children through school.

“It is my belief that through a painful past, tomorrow holds the promise of a better life for all our people when we work together in the spirit of national reconciliation and nation building,” Mantashe said.

“I therefore invite all members of the Marikana community, as well as other communities around the country, to embrace the kind of national solidarity that must forge the nation we collectively aspire to create.”

EFF leader Julius Malema says his party will push for the private prosecution of President Cyril Ramaphosa over his alleged role in the 2012 Marikana ...
News
5 months ago

Has state made amends for Marikana massacre?

Questions on whether the government had done enough to acknowledge its central role and make amends to better the lives of the victims of the 2012 ...
News
5 months ago
Next Article