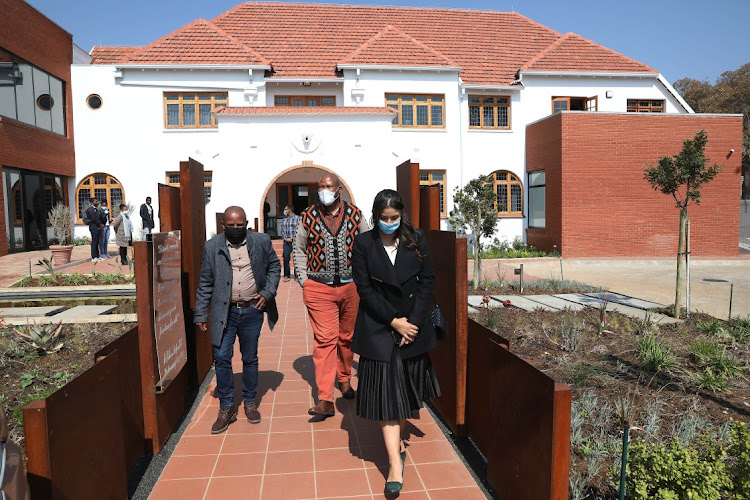 The home is now a boutique hotel.
Image: Veli Nhlapo

For R15,000 a night you can sleep in the bedroom of  late statesman Nelson Mandela's Houghton Estate residence, which has been converted into a boutique hotel.

While prices for various rooms differ at the new, “one-of-a-kind” Sanctuary Mandela boutique hotel, the presidential suite, which boasts a king-size bed and overshadowing black and white picture of Madiba, will cost you an arm and a leg.

Madiba's grandson Mandla Mandela commended the Nelson Mandela Foundation (NMF) for  keeping the memory of the former statesman alive through the boutique hotel in the leafy Houghton suburb.

Mandla said he is grateful that the foundation was able to preserve the rich history of Madiba’s house.

“This is still an entrance where you will find many images that were taken. I would confine myself to the boxers that came to this home such as Muhammad Ali and Lennox Lewis. When they visited I personally took some of the pictures on that front door... You would have anticipated [with] Madiba’s house being turned into a hotel, it would have totally changed, but you still have the look and feel. I went into my own bedroom and I still felt that presence of the room I grew up in.”

Inside the hotel there are letters that Madiba personally wrote in the house. One of them is a letter he wrote on Feb. 13, 1990, two days after his release from prison. There are also letters he wrote during his incarceration, speaking  about his children who he was longing for.

“There is also a group picture with his children, that being my father Makgatho, Makaziwe, Zenani, Zindziswa, Nobuntu and others. It gives you that disconnection Madiba had raising his own children and this is how he overcompensated in raising his grandchildren.

“I am proud to have had those moments with my grandfather, particularly in this house. The foundation has held on [to] Madiba’s legacy and it is a place of reflection. People can come here and be in a space of this global icon and see the ordinary life the man lived,” said Mandla.

The foundation's CEO Sello Hatang said he is excited about the project, which was conceptualised in 2017.

“We are super proud. Once you are standing here and looking at this as a completed project, one is super proud. I want to thank the team for the vision they had to just have this preserved to its old self. We were able to retain the parts of what it was — a home,” said Hatang.

The hotel has nine curated rooms, a restaurant, bar and lounge, swimming pool, two meeting rooms and an on-site parking space. Hatang said the hotel is expected to open on September 1.

Douglas Gibson (The Star, August 10 2021) made a brilliant suggestion when he said, "South Africa needs a government of national unity (GNU) to ...
Opinion
9 months ago
Next Article