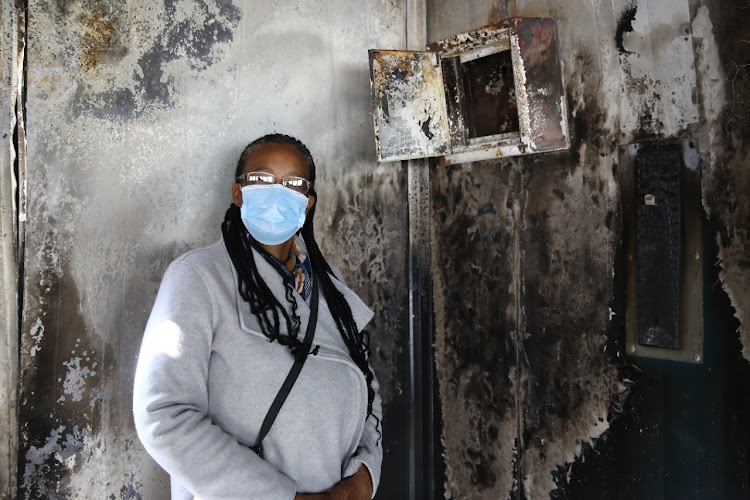 Sophie Mogable, acting principal of the Edenpark Secondary School, stands in a mobile classroom that was burnt by thugs during recent unrest.
Image: Thapelo Morebudi / The Sunday Times

During violence and looting last month, Edenpark Secondary School in Alberton, Johannesburg, had one of its mobile classrooms torched.

But this wasn't the first time the school had been hit.

“When the unrest started I was called by someone who mobilises the community watch, telling me the mobile classroom was on fire. The school's premises have a serious challenge with people walking in as they please, and some people hang out there at the weekend.

“We have fallen victim to burglaries in the past. One container class was burnt down and the electric wires were stolen. Sometimes the community mobilises and stops the action,” Mogable said.

She said aluminium window frames are a big target during burglaries.

Mogable was speaking as parliament's portfolio committee on basic education and the select committee on education conducted an oversight visit to Gauteng schools that were vandalised during last month’s unrest.

The basic education department earlier told MPs the protests and looting affected 137 schools and offices in KwaZulu-Natal, with one school in Pinetown, west of Durban, burnt to the ground.

Four schools in Gauteng were affected but there was no major structural damage. Damage included the loss of electrical wiring, admin blocks, doors, roofs, ceilings, ablution facilities and sanitary fittings.

Rondebult Secondary School in Heidelberg experienced a number of burglaries during the lockdown.

Lindiwe Mokoena, the principal, said they needed the government to provide security to schools in the area, preferably armed response and a CCTV system.

She said the damage affected mostly the feeding areas because when there’s no electricity lessons are cancelled because no feeding takes place for the day.

She said the damage to the palisade fence was addressed.

“Before this recent burglary, we had one in 2018. They came in at night and took everything. Laptops were stolen and smart boards were lifted. They even had an opportunity to grind the main door, we now have a strong room and it’s helpful.

“There were five culprits apprehended and handed over after the recent burglary,” Mokoena said.

“Before Friday toilets [at Rondebult] will be fixed. Before the weekend a service provider will fix electricity and water challenges. Police patrol this area to ensure a sustainable solution,” Lesufi said.

Elleck Nchabeleng, chair of the select parliamentary committee on education and technology, said based on their observation, the damage at the schools are a result of sheer criminality.

“It’s also self-hatred. People are destroying things that are benefiting them, and it’s like self-mutilation. The communities must take charge of their facilities and not let criminals destroy them. Thieves won’t come from outside the area; people who steal from the schools are from the vicinity of the schools,” Nchabeleng said.

He said after the assessment they will report back to parliament.

“We are sitting ducks for criminals, it’s a very difficult battle, we are in the belly of criminals.”
News
10 months ago

In a presentation to the education portfolio committee last week, the Gauteng education department said 401 schools had been hit by criminals, some ...
News
10 months ago
Next Article