Milanie Bennett was one of first to administer SA's vaccines, including to President Cyril Ramaphosa in February 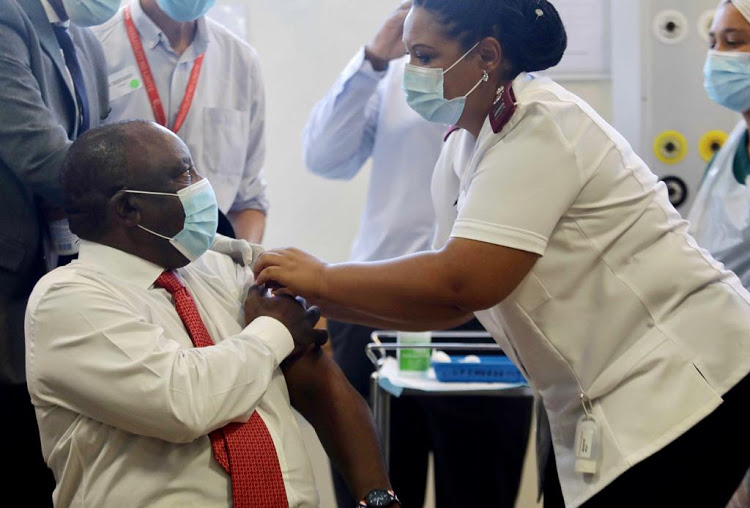 Six months after she vaccinated President Cyril Ramaphosa and saved many against Covid-19 complications through inoculation, Cape Town nurse Milanie Bennett felt the sting of Covid-19 when her husband, Langley Bennett, succumbed to the virus.

This week friends and relatives took to social media to pay tribute to the former insurance consultant after he died at a Cape Town hospital due to Covid-19 complications on Monday, leaving behind Milanie and their young son, Noah. He was 45.

Bennett's friend and former colleague Natalie Smith was one of the people who expressed shock at the “devastating news” on Facebook. “I'm going to miss you my friend. My world is less blessed because you are no longer in it. But you are home with God. May your dear soul rest in peace and rise in glory.”

Nicky Germshuys described Bennett as a devoted husband and father. “Can't believe the tragic news ... Langley you were one in a million ... a devoted husband, father and a dear friend. My deepest sympathies to Milanie, Noah and the rest of the family.”

His brother Darren Bennett said: “You're a brother, father, friend and more. You're special, one of a kind. Me knowing you and what u did in this life to help each and every one. Doesn't matter if u know him for a second. You're special and will always be remembered through your jokes, laughter, fast but small steps. I thank the Lord that He gave me an opportunity to have a brother, father, friend,” he wrote on Facebook.

Smith later described Bennett, who is originally from Adelaide in the Eastern Cape, as a family man who loved his wife and son. “I've known him for seven years and we worked together at the Old Mutual head office until I left to open my own business a few years ago. He was a very close friend ... someone that I could rely on. He was always very proud of his wife and could do no wrong. He really celebrated her, including the fact that she vaccinated the country's president,” she told TimesLIVE.

“His son meant the world to him and he always posted his pictures on his social media page. Family was everything to him.”

Milanie, who works as a registered nurse at Khayelitsha District Hospital, had a moment of fame in February this year after she vaccinated Ramaphosa during the launch of the Covid-19 vaccination for healthcare workers. “I feel very proud and honoured to have administered the first vaccine today. We made history and I'm very proud to have been part of it,” she said shortly after she inoculated Ramaphosa.

She was not immediately available to talk about her husband's death, but given her 25-year record as a nurse, she is well aware of the important role that vaccines play in combating serious diseases. “I am thankful for the vaccine and the role I play in administering it. We are now part of making history by fighting Covid-19 through the vaccine. The vaccine will save countless lives,” she said in February.

David Morris, the husband of renowned chef Jenny Morris, has died due to Covid-19 related complications.
News
10 months ago

She said at the time that her family was very proud of her. “My family is very proud of me and supportive of me getting the vaccine. My husband indicated that he will also take the vaccine when it is his turn. I also received a message that my teachers and the community from my hometown are very happy and proud of me.”

Writing on Facebook, Emare Burke described Bennett as a good husband to Milanie. “So sad ...we are losing all the good men, husbands, friends and loved ones. My heart breaks and bleeds for your family. I know exactly how you feel. It’s not easy and you will never be the same again. You only learn to live without that person.”

Zahier Davids described Bennett as “Mr Turbo”. “The name came from his short fast steps and his love for turbo cars. There was never a dull moment with him around. I remember the frequent pop-ins at my office when we worked at Old Mutual. There was never a day that he didn’t come ... the main reason was to talk about cars.”