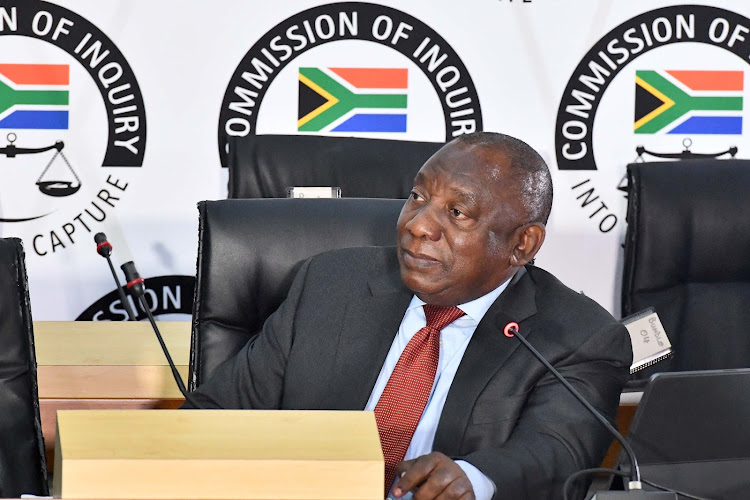 President Cyril Ramaphosa during his second day appearance at the Zondo commission in his capacity as president and former deputy president of SA.
Image: Elmond Jiyane/GCIS

President Cyril Ramaphosa has indicated that he would wait for the final verdict of the inquiry into state capture before reconsidering some of the appointments he made of people who were implicated in allegations within his national executive and top public service posts.

These included deputy water and sanitation minister David Mahlobo and correctional services commissioner Arthur Fraser, who had been deeply implicated in allegations of corruption and impropriety relating to the State Security Agency (SSA) where they served as minister and director-general respectively.

Ramaphosa was on Thursday appearing for the second day before the Zondo commission where he was expected to give testimony on what he had done to reverse corruption and state capture.

While Ramaphosa spent most of his first day pointing out to the commission that he had either been kept in the dark about wrongdoing or deliberately kept quiet and not directly confront his predecessor, former president Jacob Zuma, he faced grilling on why he had rewarded some of those seriously implicated with cushy positions after he took over in 2018.

Ramaphosa’s evidence mostly focused on the deepened dysfunction and political manipulation of the State Security Agency (SSA), whose explosive evidence had been laid bare before the commission and what he had done to help cleanse the agency of its crisis.

Placing SSA in presidency not 'emergence of a dictatorship': Cyril Ramaphosa

President Cyril Ramaphosa has responded to critics who believe that his decision to disband the department of state security and place the State ...
News
9 months ago

Evidence leader Adv Paul Pretorius questioned why Ramaphosa had appointed Mahlobo and Fraser despite knowing allegations against them.

Mahlobo, who was SSA minister from 2014 to 2017, had been accused of working as Zuma’s henchman in looting the SSA and of repeatedly taking millions of rand in bags of cash to him, according to intelligence operatives who testified before the commission and the 2018 report of the high level panel led by current national security advisor Sydney Mufamadi.

Myburgh asked  if his decision to keep some of the implicated people was influenced by political power dynamics within the ANC. “Is it perhaps because of balance of forces?” Myburgh asked.

Commission chair, deputy chief justice Raymond Zondo, however pointed out that the commission’s report would likely be taken on review by those implicated, which would drag the legal standing of the report, and questioned why Ramaphosa had to wait for the conclusion of the commission’s work before acting on implicated individuals.

“You ought to be alive to a situation where you could end up with no action being taken for a number of years. Some people would be believing, well, that nothing should be done until those processes of reviews and appeals have been exhausted.”

Zondo said the concern was that people who had to act on wrongdoing had “unnecessarily waited for court processes” which were busy with other matters other than the cases of those concerned.

“The court process will take six or 10 years and in the meantime nothing is done when something should be done. I am doing nothing more than just alerting you,” Zondo said.

Ramaphosa, however, indicated that he would not wait for the outcome of review processes as his administration took the work of the commission seriously.

“The commission’s existence and work is a watershed moment for our country in as far as dealing with corruption and the state capture we have gone through. So you can rest assured that we are going to take your findings very seriously,” Ramaphosa said.

When asked about Fraser, Ramaphosa said he had also been waiting for “a more full and complete picture which this commission is going to assist me with” before taking action.

Although the deputy president is appointed by a president in SA in terms of the constitution, experts believe there are ways that the second in ...
News
9 months ago

President Cyril Ramaphosa’s first day on the stand before the commission of inquiry probing allegations of state capture was an embodiment of the ...
News
9 months ago
Next Article