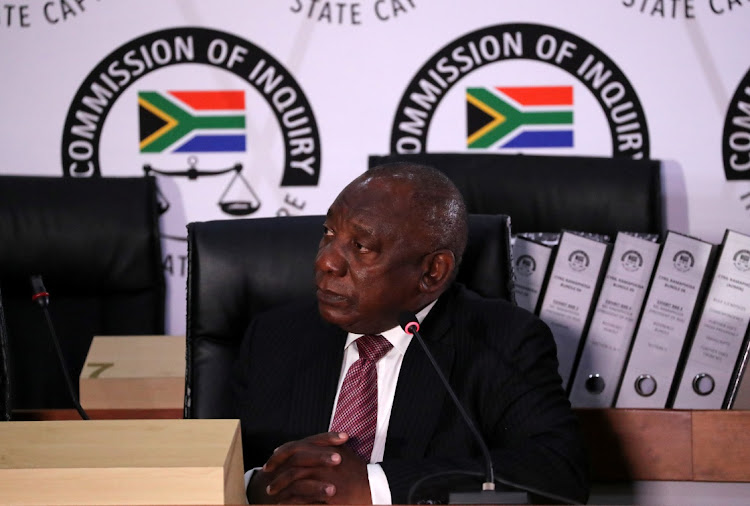 President Cyril Ramaphosa has told the Zondo commission of inquiry that he would have been fired by former president Jacob Zuma if he had been openly confrontational about state capture and corruption which he said would have bolstered wrongdoing.

Ramaphosa was on Wednesday on the stand before the inquiry to testify on what he knew and had done in relation to state capture allegations during his tenure as deputy president of the country from 2014 to 2018 as well as the head of state from 2018.

Ramaphosa has over the years faced criticism of having not done enough, along with other members of cabinet, to resist or speak out against state capture and corruption that involved the Gupta family and other alleged criminal networks under Zuma.

Ramaphosa said he got to know the incidents of corruption through the media, civil society organisations and institutions such as the public protector and auditor-general that investigated them.

He said he and other members of the cabinet had to grapple with how they had to respond to the mounting revelations, which included speaking out or resigning from Zuma’s cabinet.

He said he ruled out voluntary resignation as it would have earned him praise but “significantly impaired my ability to contribute to bring about an end to state capture”.

“Had I and like-minded individuals resigned from the executive, we would have had no ability to resist some of the excesses that were taking place — and there was a clear danger that without some measure of resistance, there would have been even fewer impediments to the unfettered expansion of the state capture project,” Ramaphosa said.

Ramaphosa said while he had publicly voiced out his disagreements with some of Zuma’s decisions, including the firing of then finance minister Pravin Gordhan and his deputy Mcebisi Jonas, there had been a “limit to how confrontational I could be in the position I held” as this would see him being fired.

“A more confrontational approach would most likely have led to my removal from office, with the same consequences as a resignation, in that my ability to effect change would have been greatly constrained, if not brought to an end,” he said.

Ramaphosa told the commission that he had instead to remain as Zuma’s deputy and work with other ministers in “resisting abuses and bring about change where we could” while being not confrontational.

“This meant ‘staying in the arena’, with the challenges, limitations and frustrations inherent in doing so, but it was the course of action that had the greatest likelihood of bringing state capture to an end, restoring the institutions of state and defending our democracy,” he said.

Ramaphosa said his administration had done much work to help end state capture and rebuild damaged institutions through probes, institutional reform and appointments of capable people.

President Cyril Ramaphosa’s evidence that ANC’s deployment committee was playing an advisory role to ministers and not dictating to them on key ...
News
9 months ago

Deputy President David Mabuza has for the first time addressed the recent riots in KwaZulu-Natal and Gauteng.
News
9 months ago

The Jacob Zuma Foundation says it is greatly disturbed by the “callous and insensitive manner” in which the NPA and certain media outlets have ...
News
9 months ago
Next Article