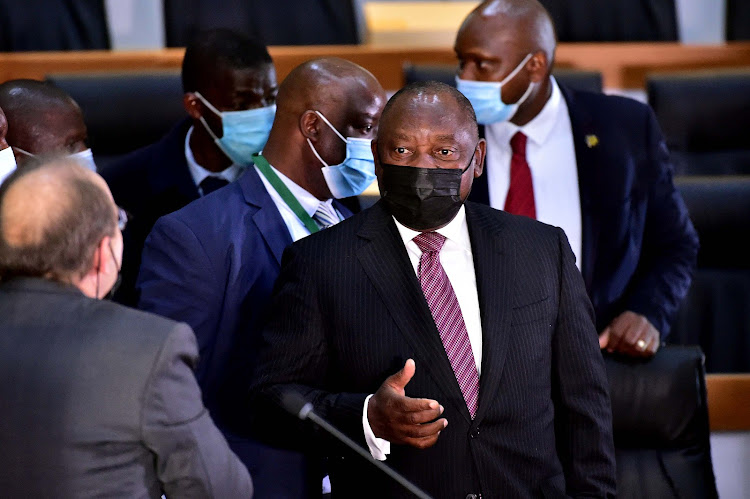 President Cyril Ramaphosa appearing before the State Capture commission in his capacity as the president and former deputy president of South Africa.
Image: Elmond Jiyane/GCIS

President Cyril Ramaphosa’s evidence that the ANC’s deployment committee was playing an advisory role to ministers and not dictating to them on key appointments within the state came under scrutiny before the Zondo commission on Wednesday after his claims were disputed by minutes of the committee.

This came as Ramaphosa returned to the stand to give testimony relating to his tenure as the former deputy president of the country and eventually the head of state.

Ramaphosa, however, had to first conclude the testimony he previously gave to the commission back in April in his capacity as leader of the ANC and its former deputy president.

This includes evidence relating to the party’s contentious deployment policy which has been blamed for enabling the appointment of incompetent and corrupt officials who enabled state capture over the years.

The commission's head of the legal team Adv Paul Pretorius told the commission that it had been established that Ramaphosa’s insistence that the ANC’s deployment committee played an advisory role in relation to key appointments in government was not consistent with the minutes of the meetings by the committee, which he said revealed that the party instructed ministers.

The commission heard that there had been no recorded minutes of the committee’s meetings from 2012 to 2017.

Pretorius said the minutes, which spanned from 2018 to 2021, correlated with the “strong evidence that has been led before the commission that in fact the deployment committee commands or instructs, or in fact makes the relevant appointments”.

“On our review, a general review of the minutes indicates that in large part, the deployment committee decides and instructs. Secondly, the recommendation does not go from the committee to the appointing authority (ministers). It is the other way around. The minister recommends and it is the deployment committee that in its wisdom and according to its practice makes a decision,” he said.

Pretorius said the minutes showed that the minister sought permission from the committee before proceeding with appointments of senior officials and heads of state-owned entities, where loyalty to the ANC and party membership was used as a factor when the committee decided.

Ramaphosa, however, insisted that while it appeared like the committee instructed and commanded ministers on who to appoint, its role was advisory.

“I would like to dispute this hard definition and say, as far as I am concerned it is more the soft one. It is a soft one by sheer operation because it is not an appointing committee by definition and its existence. In the evidence I gave here I said it is a recommending committee,” he said.

Ramaphosa insisted that there was nothing wrong with the ANC lobbying for its preferred candidates to take over positions within the state, adding that other parties were doing this.

“I know that the issue of deployment has arisen as a major issues but I would like to subject that, much as it has, where the deployment has resulted in people who are incompetent I will concede that that was an error.

"But where deployment leads to people who are competent and also able to execute the mandate that the governing party has, as political institutions we are elected to execute a particular mandate and you want to appoint people who synchronize their work with that mandate,” he said.

Commission chair deputy chief justice Raymond Zondo questioned why the ANC continued to secretly influence key appointments in the public service through the committee instead of making its lobbying and recommendation public and open to scrutiny and appointments were happening.

“I am wondering, if the ANC wants to influence the appointment of certain people within government, why should it not do that transparently so that everybody knows, rather than do it in some office somewhere where there is no transparency,” Zondo said.

A number of evidence leaders have been lined up to deal with Ramapha’s testimony in relation to state-owned companies, with Adv Pule Seleka scheduled to question him on affairs relating to Eskom, Adv Vas Soni on Prasa and Adv Anton Myburgh in relation to Transnet.

It took the ANC six years before acknowledging the phenomenon of state capture and openly backing investigations into it despite reports of its ...
News
7 months ago

ANC national chairperson Gwede Mantashe has defended the governing party’s deployment policy amid calls for it to be scrapped.
News
7 months ago