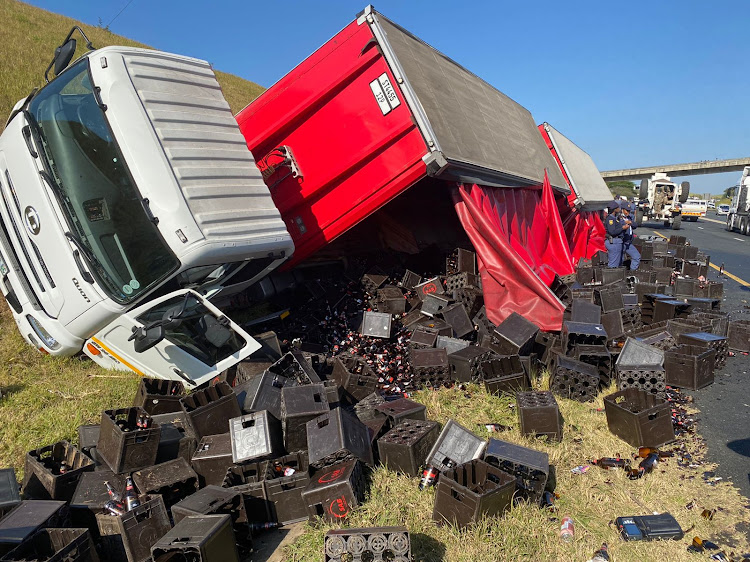 Three people were killed when a vehicle overtook several cars on the N2 between Stanger and Zinkwazi and crashed into a beer truck on August 7 2021.
Image: IPSS

Three people were killed in an accident on Saturday on the N2 between KwaDukuza and Zinkwazi, on the north coast of KwaZulu-Natal.

According to a report by IPSS Medical Rescue, a vehicle was overtaking several cars when it lost control and struck a truck carrying beer.

Two people were killed instantaneously and a third died despite medical intervention on the scene. Two others are in a critical condition and two in a serious condition.

According to IPSS ops manager Paul Herbst, the work of advanced life support paramedics on  the scene was hampered by looters stealing beer.

Traffic was severely affected on both sides of the N2.

It was the second crash on the north coast on Saturday morning attributed to vehicles overtaking several cars.

In the first incident, a young cyclist was killed when a vehicle overtook on the R102 Frasers road, crashing into a group of 11 cyclists.

The premier said while criminality dominated during the unrest and looting, he commended citizens for their efforts to root out these elements and ...
News
5 months ago

With the dust now apparently settled on the most widespread and violent period of intense unrest in SA’s post-democratic history, businesses are ...
Opinion
5 months ago
Next Article