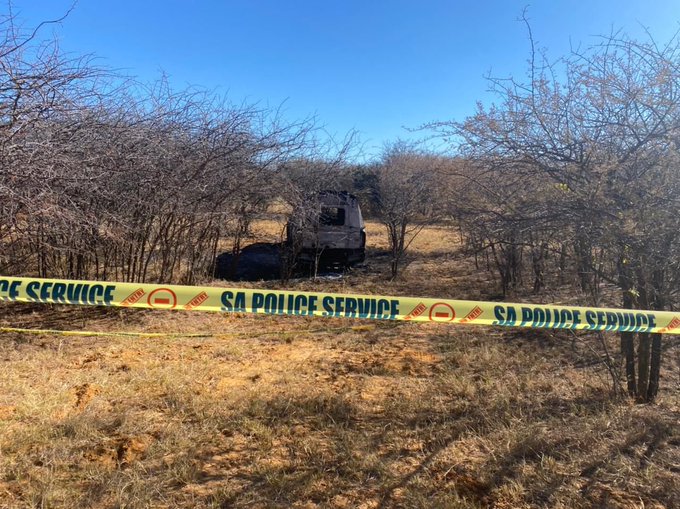 The burnt-out remains of the police vehicle in which Constable Simon Ntsekeletsa and Sergeant Mojalefa Molete were on patrol in when they were murdered.
Image: Twitter

Five men arrested for the murders of two North West police officers have appeared in court.

A team from the Hawks and the police arrested the men after linking them to Monday's murders of Const Simon Ngakaemang Ntsekeletsa, 50, and Sgt Mojalefa Horatius Molete, 42, who worked at the Mareetsane police station south of Mahikeng.

Benjamin Jacobs, 42, Jeremiah Mongale, 26, Rapulana Keikantse, 25, and Matthews Modukanele, 20, made a brief appearance at Itsoseng magistrate’s court on Friday. The fifth accused, who is a juvenile, appeared separately in the children’s court.

All five face charges of murder, malicious damage to property and possession of a stolen firearm

The Hawks have provided sparse information about the murders, other than saying the police officers' charred bodies were found in the back of their burnt police vehicle.

The five suspects were found with a 9mm pistol, allegedly taken from the officers, and clothing with suspected blood stains.
News
1 month ago

Evidence found so far includes bloodied clothing, their police badges, a blood trail, a 9mm SAPS pistol, a knife and a hammer.

According to North West Hawks spokesperson Capt Tlangelani Rikhotso, Ntsekeletsa and Molete were on patrol when they came across a vehicle loaded with suspected stolen goats at about 9pm on Monday.

But the officers failed to arrive. Efforts to reach them on their cellphones were unsuccessful and they could not be contacted on police radio.

“A search for the police officers was immediately launched,” said Rikhotso.

The following morning villagers reported bloodstains on the road leading to the police station. Detectives who investigated found a knife and a police badge belonging to one of the deceased.

A second badge was found nearby, and  investigations led to the burnt state vehicle with the bodies inside in Mosita, about 80km from Mareetsane.

“The team followed all leads and worked tirelessly until they traced and arrested the five suspects,” said Rikhotso.

“They were found in possession of a 9mm pistol alleged to have been taken from the slain police officers. A hammer, clothing with suspected blood stains and a vehicle have been seized for further investigation.”

The suspects were arrested in Logageng village, about 35km from Mosita. They were remanded in custody and the matter was postponed to Aug. 5 for a formal bail application.

While searching on Tuesday for a cow stolen over the weekend, police in northern KwaZulu-Natal found another cow that had been stolen to pay lobola ...
News
4 months ago

The 6 SA Infantry Battalion training area is now being used by illegal hunters and livestock thieves, say the farmers.
News
5 months ago

‘Farmers Under Siege’ highlights the murderous battle over livestock in the hills of the Eastern Cape.
News
5 months ago
Next Article