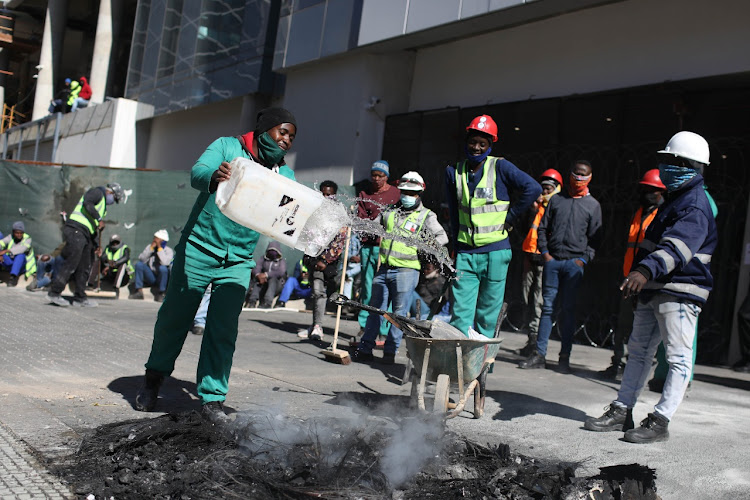 Workers at a construction site clear a barricade as private security monitors the scene at Benmore in Sandton, Johannesburg. A group of construction workers protested on Wednesday morning over a wage dispute and attacked a security guard.
Image: Alaister Russell/The Sunday Times

Three people have been arrested after a protest over alleged nonpayment of salaries at a construction site in Benmore, Sandton, on Wednesday, during which a security guard was assaulted.

Capt Kay Makhubele said one suspect was found in possession of a stolen firearm during a police operation in Alexandra and the two others were arrested for assaulting the guard.

The three suspects are expected to appear in court on Friday.

The security guard was admitted to hospital after he was stabbed in the chest during the protest.

Scorpion Risk Holdings CEO Riaan Erasmus said: “We were called out to come and assist with a possible riot that might take place on the premises. We responded. As my team arrived, the protesters were on the main road and started assaulting the guards. One tactical member was stabbed with a knife on the left side of the chest.

“He has been admitted to hospital. According to the doctors, he is stable at this stage. The stab wound is just under the heart,” said Erasmus.

“The workers attacked a security guard and he jumped inside a patrol car and drove off to get away from the violent crowd. The security guard [was] robbed of his shotgun and cellphone,” said Minnaar.

A security guard is fighting for his life in hospital after he was stabbed in the chest during a protest by construction workers over unpaid ...
News
9 months ago
Next Article